Clark sharpens game and her faith on women's Ultimate team 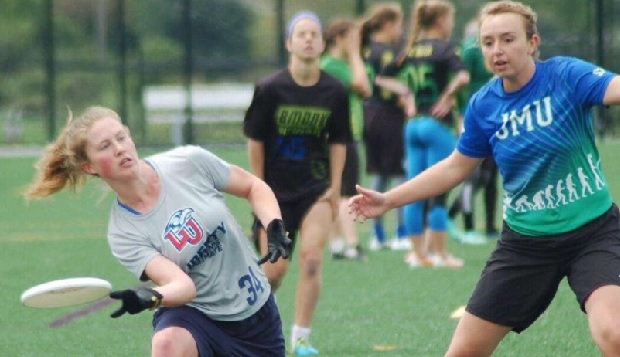 After reaching out of her comfort zone and trying her hand at a new sport, Katherine Clark, a rising senior cutter on Liberty University's women's Ultimate team, has emerged as one of the Lady Flames' leaders over the past three seasons.

"It was a little overwhelming at first because I couldn't throw forehand and a lot of the terms they used I was completely unfamiliar with," Clark said. "But everyone was so friendly and the coach was so welcoming and encouraging that even though I was very discouraged, I just couldn't quit. They became fast family to me and I've been playing ever since, and I absolutely love it."

Clark has stepped out in her faith, too, particularly through prayer and learning how to love even her opponents.

"One of the things we do as the women's Ultimate team is we always ask the opposing team after our games if they want to pray with us," she said. "We all gather in a circle and any of them who would like to is welcome. I remember after one game my freshman year (an opposing player) told us we should never stop doing that because you never know who is going to hear that for the first time and that may be the only Jesus they hear of for a while."

She said the Lady Flames have opportunities to wear their faith on their sleeves and share their testimony through their actions on the field, but the post-game prayer is the most impactful time.

"As a self-officiated sport, how we respect our opponents in making those calls and responding to those calls is also huge as Christians," Clark said. "That's one way we can stand out in showing our opponents respect, but the way that stands out most to me is praying with our opponents even when maybe we did have a rough game, even after a loss, we always, always pray with the other team."