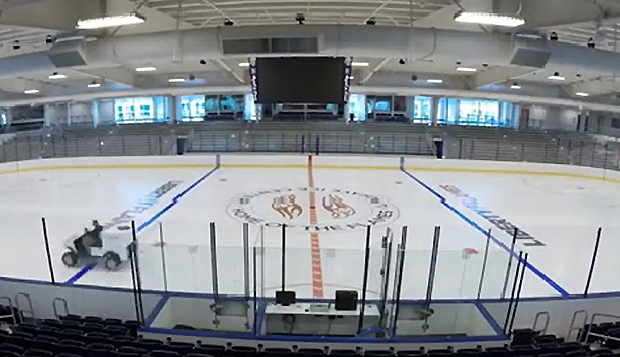 With Liberty University's first hockey exhibition game of the 2017-18 season less than a month away — an ACHA Division I women's opener against the Hamilton Hawks on Sept. 1 — LaHaye Ice Center's rink received a facelift this week. The facility is home to Liberty's five hockey teams as well as the Lady Flames' figure skating and synchronized skating teams.

A 50-second time-lapse video shows the 20-hour refinishing project, which included replacing the ice and changing the paint scheme. The work started Wednesday night and concluded Thursday at around 4 p.m.

"It has a great new look, something new and fresh," Brueckner said, noting that Young, along with Club Sports Coordinator of Events Kaleb VanDePerre and Marketing Graduate Assistant Matt Voss, coordinated with Liberty's Marketing Department on the new design. "We will be building up the ice to about an inch thickness over the next week and should be open for business next Friday afternoon."

Players will be arriving the following week for their first on-ice workouts in preparation for preseason training camp and tryouts later this month.