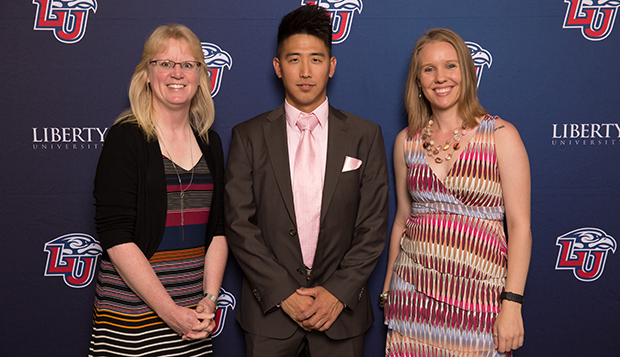 He replaces last season's graduate video coordinator Carl Harter, who is now working in Florida as a 16-and-under junior-level coach for a program affiliated with the NHL's Panthers. Harter introduced XOS Digital's Thunder Hockey HD software used by the majority of NHL and NCAA Division I teams to Liberty's post-game analysis last season and Chung will seek to expand on that position.

"Carl did a great job and he'll be able to take that to the next level," Flames ACHA DI men's Head Coach Kirk Handy said. "We're really excited about having Jonathan aboard. He's going to be a huge asset for us. I think players will appreciate what Jonathan brings to the table. He gets the culture that we want with our hockey program."

Chung currently works out of the Club Sports offices in the LaHaye Ice Center and serves through the College of Applied Studies and Academic Success (CASAS) as a professional advisor for all Club Sports student-athletes as well as all Liberty students pursuing careers/degrees in Athletic Training.

It may take him some time to learn the technical aspects of using the XOS software — Harter will help train him over the phone — but Chung has the hockey background, educational skills, personal tact, and spiritual influence needed to make a seamless transition into this new role.

"All my talents and skills that I have fit this position tremendously well," said Chung, who graduated with a B.S. in Exercise Science in 2011, a master's in K-12 teaching in 2013, and is pursuing his doctorate in Education. "With my education background as a teacher, my experiences as a player at the DI level, my experiences as a coach, and then my experience as an academic advisor, I feel like this is part of my calling and I get to do it in a realm where I have a passion for, which is hockey."

He plans to take a holistic approach to improving players' technical performance as well as developing them as Christian men. He will meet with the Flames in one-on-one sessions to review video while mentoring them and guiding them spiritually and vocationally.

"With coaching, player development is the main goal, but in the grand scheme of things, at Liberty University, we want to make sure we're not only growing the athletes as hockey players, but we want to grow them toward Christ, to become men of God," Chung said.

"He will provide us with great insight to guys, not only with the video sessions that we'll have but one-on-one," Handy added. "His desire is to have guys improve on their own games and ultimately to see the team improve. We want to do whatever it takes to make our team better and Jonathan's going to be a huge part of that."

"This is an awesome opportunity to give back to the program and to get to coach with Kirk and Jeff and Coach Bert, all experienced veterans with winning pedigrees," he said.