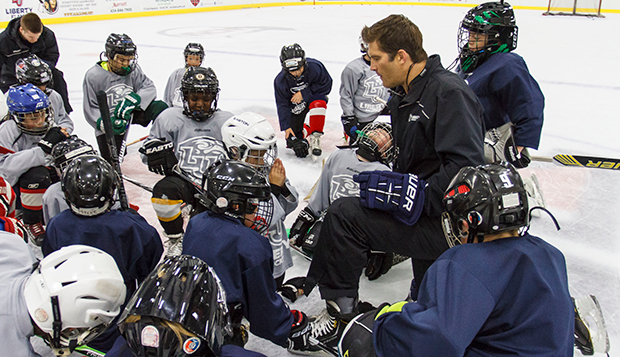 Enrollment in Liberty University's "Christian Hockey School," now in its 10th year running, continued to snowball this summer with over 200 participants in the three camps — girls ages 6-18 from June 25-29 and boys ages 6-12 from July 9-13 and ages 13-18 from this past Sunday through Thursday.

"This by far is our biggest week of camp ever," Liberty ACHA Division I men's hockey Head Coach Kirk Handy said.

Players came from as far away as California, though most were from the East Coast, and from diverse family upbringings and hockey backgrounds.

"There is a pretty wide spectrum of skill out there," said Peter Kazmierczak, a graduate assistant who just completed his M.B.A. at Liberty and his playing career with the Flames' ACHA DII team this spring. "There is some really, really good talent and some kids that are still learning the basics. They all just come to get the Christian hockey atmosphere."

"The division of labor is healthy because if you get too spread out, you're not going to do a great job at (everything)," Boettger said. "It's been nice to bring in the talents of different people and to let them run with their area."

Besides being mentored by camp counselors on and off the ice, campers were challenged to grow spiritually through testimonies by coaches, including former DI men's Assistant Coach Marc-André Bourdon as well as Kazmierczak, Hayes, Harris, and Hamilton, Liberty's first captain designated for the 2017-18 season and a former camp participant himself.

"Our theme this year was Proverbs 4:23, which is ‘Above all else, guard your hearts, for out of our hearts flows everything we do,'" Boettger said. "That's been something that Brian has really encouraged the guys to think about: ‘What does that mean and how does it impact them, on the ice even — and their competition and how they react to teammates or opposition — but also off the ice? What kind of impact does that have in helping to make decisions?'"

"That's been my favorite part of camp, that chapel time," Kazmierczak added. "Every single counselor here loves the Lord and they're really doing a great job of pouring into the kids. It's cool because I got to know the kids last year and I would say at least 80 percent of the kids returned, so we get to ask them how their year went and what type of things they went through. Then, on our hall late at night, just getting to know them and kind of connect with them on a human level, and get them to realize, ‘I've been through all of the things that you're going through. These are some of the mistakes that I have made and these are some of the blessings that I've been given.'"

During down time, when they weren't on the ice or picking up dry-land training techniques from strength and conditioning coordinator Chris Kerr, campers got to experience many of the recreational facilities Liberty has to offer, swimming and rock climbing in the LaHaye Recreation & Fitness Center, located across the parking lot from the LaHaye Ice Center and playing Ultimate on the East Campus Intramural Fields.

"Liberty's facilities are state-of-the art and getting an opportunity for the student-athletes to participate outside of these walls obviously is good for their exposure to Liberty," Boettger said. "We want them to have fun, to enjoy the camaraderie, and as part of that component, involve the spiritual dimension as well."