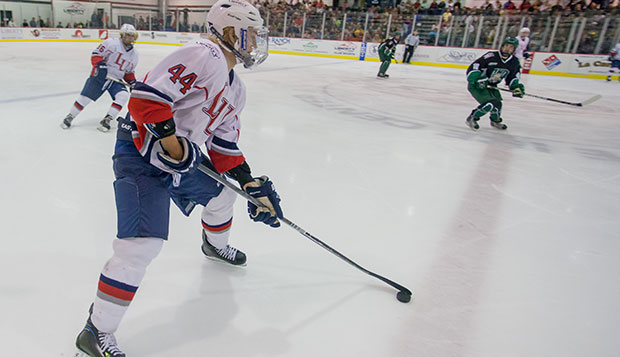 Liberty University's Division I men's hockey team hits the road with two straight losses behind it for a pair of games against the Seawolves of Stony Brook University this weekend. The Flames take the ice on Saturday at 8:30 p.m. to begin the series.

While the Flames (9-7-1) have taken many wins and losses in blocks, beginning the season with an eight-game win streak, followed by six straight losses, Stony Brook has been more back-and-forth this season. At 6-4-1, the Seawolves recently won three straight, their only winning run so far. The team's only other streak has been a pair of losses at the American Collegiate Hockey Association Showcase in early October.

Liberty was originally scheduled to play Stony Brook at home Nov. 2-3, but due to Hurricane Sandy, the Seawolves were unable to travel. The games are rescheduled for December 7-8.

Liberty Scouting Report: The Flames dropped two games to Delaware, the defending ACHA national champions last weekend. Before that, the Flames split with then-No. 1 ranked Ohio. Liberty won the second of two very tight games 4-3 to dish Ohio its first loss and oust the Bobcats from atop the rankings.

Rick Turner currently leads Liberty in points (21 goals, 15 assists) and is tied for the No. 5 spot in the entire ACHA. Turner was silent, however, in the Delaware series. Ryley Egan with 23 points (6 goals, 17 assists) is second and the Flames' assist leader.

Flames captain Andrew McCombe continues to look strong for Liberty, with two points in the Delaware series and eight in his last five games.

Stony Brook Scouting Report: The Seawolves are riding a three-game winning streak after a two-game sweep of Rhode Island last weekend, 5-4 in both matchups. Stony Brook topped Drexel 5-2 on Oct. 27 after splitting with Rutgers (7-0 and 3-5, respectively) the weekend before.

Nick Barbera, a sophomore, leads the Seawolves in points with 15 and goals with eight. Freshman Andrew Balzafiore has 10 assists on the season to lead the team.

All-time Series: Liberty leads the all-time series at 13-1-3. Last season the Seawolves dropped two straight at Liberty, 8-5 and 5-3 before beating the Flames 5-4 in a shootout at Stony Brook Jan. 7. The Flames outscored Stony Brook 7-4 in the second road matchup, concluding the season series with a three games-to-one advantage.