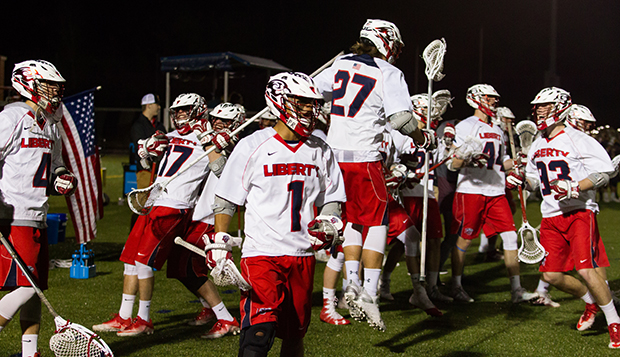 Liberty University men's lacrosse Head Coach Kyle McQuillan recently sat down with Club Sports Video Coordinator Gabe Henderson to recap the spring season and look ahead to what is in store for the Flames' Men's Collegiate Lacrosse Association (MCLA) Division I program.

The Flames finished 8-7, losing to No. 3-ranked Georgia Tech in the championship game of the SouthEastern Lacrosse Conference (SELC) Division I Tournament, and narrowly missed an at-large bid to the MCLA Division I National Championships for the fourth season in a row.

Though their record hovered around .500 for the entire year, the Flames matured and bonded as a family as the season progressed, building on a tradition of success to solidify their foundation for the future.

"It was a long season but I think we grew a tremendous amount," McQuillan said. "We had some ups, had some downs, had some huge wins, had some tough losses that I wish we could have had back. We came in with a national ranking of 16 and we ended at 16, so at the very worst, (after graduating) a prolific class of nine seniors that did so much for this program, this team came in and held their ground … and (represented) Liberty University lacrosse at a high level."

He did acknowledge that the Flames missed an opportunity to reach nationals for the first time at the MCLA Division I level, leaving something to be desired as they entered the offseason.

"We set a goal every year to win the SELC (Tournament) and we didn't do that, so obviously, we fell short there," McQuillan said. "We set a goal of qualifying for our national tournament and we fell short there again as well. Do we say that our season was a failure as a result of that? Absolutely not. There were so many things that the guys were able to have success in and prove to themselves that in the years to come … the expectation is going to be that much more. So we're not going to lower the bar. The expectation for next year is going to be the same as it is every year."

McQuillan and Assistant Coach Mike Zumpano are excited about the Flames' incoming corps of recruits who will strengthen an already deep returning cast of players, including rising sophomore attack Caleb Britton (50 goals, 21 assists) and junior attack Sam Gregory (36G, 27A), who ranked in the top 20 in MCLA Division I in scoring last season.