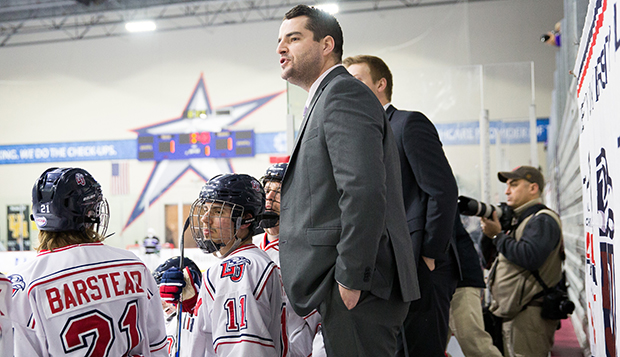 Liberty University's ACHA Division I women's hockey team will have a dynamic coaching staff in place for the 2017-18 season with Chris Lowes shifting over from the ACHA DII men's team to replace Paul Bloomfield.

"We're super excited about Chris coming in as the head coach of the Division I women's team," said Liberty Club Sports Athletic Director Kirk Handy, who also serves as head coach of the ACHA DI men's hockey team. "He understands the mission of Liberty's Club Sports Department and knows what it takes to be successful at Liberty University and in the ACHA."

"There will be a lot of similarities in coaching the women, and some fun new challenges," said Lowes, who led the Flames to the ACHA DII National Championship final the past two seasons in his eighth and ninth years at the helm after playing under Bloomfield and Handy from 1998-2002. "They have had a history of success very similar to what we have had over the past few years."

Lowes joins Justin Forth, who served as an assistant to Bloomfield for three years from 2011-14 and the past two seasons (2015-17) after previously playing under Lowes as a senior in 2009-10.

"I'm excited that Chris is giving me the opportunity to stay on the coaching staff and to get the opportunity to work with him," Forth said. "He comes with a winning pedigree and obviously knows how to get his players to buy into what he's trying to do."

They will welcome the addition of a second assistant coach, Leah Carlson — the 23-year-old sister of incoming ACHA DI men's hockey recruit Sam Carlson — who played four seasons of NCAA DI hockey and one season of NCAA DI volleyball for Robert Morris University in Pittsburgh.

After coaching the DII men for nearly a decade, Lowes is eager for the new coaching opportunity with the Lady Flames. Both teams reached their respective ACHA championship games this season, played back-to-back at the Ice Haus in Columbus, Ohio, on March 19.

Lowes believes he has enough returning talent (including 13 rising sophomores) and at least five promising recruits to stand an excellent shot of reaching their sixth straight ACHA DI Final Four next March. Building on the strength of Bloomfield's three recruiting classes since the Lady Flames won their first national title in 2015, Lowes is confident the Lady Flames can contend for another in the near future.

"Certainly, our goal is to continue the excellence on the ice and the presence we have in the ACHA women's Division I field," Lowes said. "Without a doubt, it's no secret, our goal is to win a national title year-in and year-out."

Carlson, a defenseman for Robert Morris who served as a team captain her senior season, grew up playing outdoor boys hockey in Alaska before later playing for her high school team and on the Alaska All-Stars' girls travel team. That squad competed in the Fellowship of Christian Athletes (FCA) Chowder Cup in Boston, where she was recruited by Robert Morris primarily for her skating ability.

"I wasn't the most skilled on the ice — I was kind of a grinder — but I was very strong in front of the net and did the simple things to make sure that no one scored," she said.

After working as an on-ice instructor and counselor with HMI's camps for the past six summers, including this past week at Robert Morris' campus in Chicago, Carlson will bring plenty of energy to the Lady Flames' practices as well as in the locker room and on the bench.

"I'm passionate about hockey and excited to be able to relate to the girls," said Carlson, who will start her master's degree in Public Health with a specialization in nutrition this fall. "I want to do whatever I can to learn from Coach Lowes and to bring my experiences of playing at a high level to the team."

Lowes' replacement as head coach of the Flames' DII men's team has yet to be named, but Handy is expecting to make that announcement by Aug. 1.