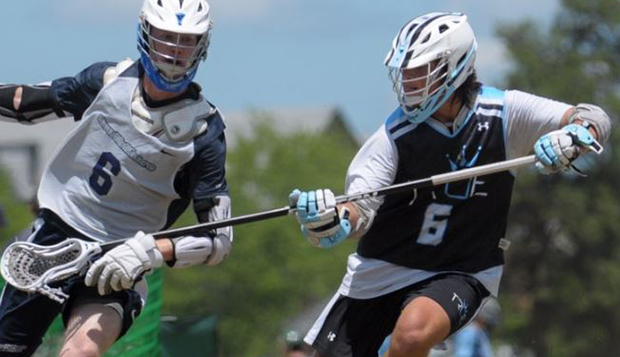 In lacrosse, as in most sports, it can be said that offense wins games, but defense wins championships.

"At any point in a game, especially in championship games, you can probably point to a time when defense is the deciding factor," Liberty University men's lacrosse Assistant Coach Mike Zumpano said. "That's a motto that shows true across all sports and it's rooted in being consistent and steady, regardless of whether the offense is playing well or not. We need to be able to hold our ground at all times."

Liberty (8-7) featured a young team this past season, with several freshmen scattered throughout its starting lineup. So it wasn't surprising that the Flames came up on the short end of a number of tight games decided in the final minutes of regulation or overtime.

"This year, we had four or five games where we very well could or should have won, but lost by a goal in overtime," Zumpano said, noting that six of Liberty's seven losses came against teams that went to nationals, including Georgia Tech in the SouthEastern Lacrosse Conference (SELC) Tournament final and Virginia Tech, which won 14-13 in triple overtime to clinch the SELC Northwest Region regular-season title. "If we can take those experiences and use them to help us learn to play more consistent, steady, and sound on the defensive side of the ball, we're going to see a lot more success on the national level."

For the Flames to claim their first tournament championship and secure their first bid to the Men's Collegiate Lacrosse Association (MCLA) National Championships at the Division I level, Zumpano realizes they must continually fortify their defensive corps. That's why four of Liberty's five incoming freshmen recruits for the 2017-18 season are defenders.

"We've always been known as an offensive juggernaut," Zumpano said. "With the guys we have currently and the guys we have coming in, we will be able to make a strong statement and assert ourselves as a defensive powerhouse as well. Georgia Tech has been a model of defense and has seen success at the national level, and Virginia Tech has, too. We're excited at the chance of being able to compete with them on a defensive level, year-in and year-out."

One of Liberty's top defensive recruits is Mitchell Gorski, a 6-foot, 195-pound four-year varsity letterman at Athens (Mich.) High School who also has played on True Michigan, one of the best travel teams in the country. He rescinded his verbal commitment to play for Ohio Wesleyan after visiting Liberty for the first time.

"I like everything that Liberty stands for," Gorski said. "I came down and took the tour and met up with Coach Zumpano after reaching out to (Head Coach Kyle McQuillan). It's a great fit."

He was coached by rising senior Flames midfielder Brett Miller, from Ann Arbor, Mich., when he was a freshman on a local youth team. As a senior at Athens, he was a captain and helped lead his team to its first regional championship since 2010.

"Individually, I had one of my best years yet," said Gorski, who is adept at working off the ball to create turnovers and spark the transition game as a close defenseman. "I don't think it will be a huge adjustment for me. They play fast and play aggressive and that's my style."

He grew up playing with his older brother, now an attack at Rhodes College in Memphis, Tenn. "We help each other out in practice, going one-on-one since he plays offense and I play defense," Gorski said.

He hopes to emerge as a leader at Liberty, as he did at Athens.