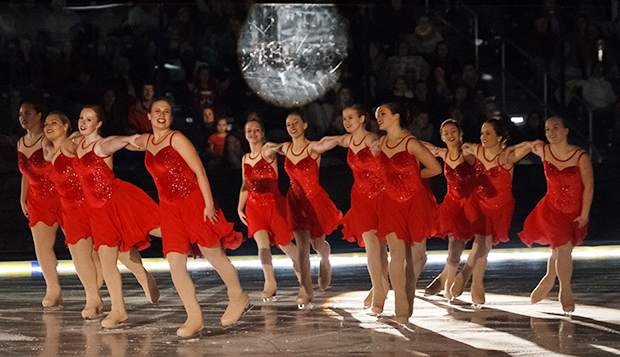 The Lady Flames' synchronized skating team participated in the second Christmas performance of PraiseFest on Ice in December at the LaHaye Ice Center.

Liberty University's synchronized skating team has shown steady improvement over the past few seasons, highlighted by a third-place showing at the Jan. 27 Eastern Sectionals in Hershey, Pa.

"It was a really positive season and we really built off our (2015-16) season and improved so much," Lady Flames Head Coach Tatiana Payne said. "Each performance was a huge improvement off of last year, (but) still not perfect. We want that perfection. If we had that perfection, we would have gotten gold."

Payne has high expectations for the 2017-18 season, when, as she announced in this "Coaches Club" interview with Club Sports Video Coordinator Gabe Henderson, Liberty will have its largest team to date and will move up from the Open Collegiate to the Collegiate Division of the United States Figure Skating Association (USFSA), which will give it the opportunity to qualify and compete at the USFSA National Championships.

"We're just looking forward to starting out as a Collegiate team with a bang and making a really big impression," Payne said. "I feel really encouraged because it's been a long time coming and I'm really excited for this year. We have some big road trips coming up. We're going to Massachusetts, we're going to Michigan, we're going to Eastern (Sectionals) in Fort Meyers, Fla., at the end of January. I know the girls are really looking forward to that and then if we do qualify for nationals, we go on to Portland, Oregon."

The team will have a roster of 18 skaters, including a few incoming freshmen and a few from the figure skating team who will compete in both disciplines.

"Essentially, what we've done is compiled a master team of phenomenal skaters with great skating skills," Payne said. "Although we do have some newcomers, those who are returning are going to welcome them with open arms and ensuring that the team jells. (Rising senior) Katherine Thacker will be returning as a co-captain along with sophomore Kimberly Joe. I have full faith in them. This is going to be a really, really strong year for us and I can't wait to start."