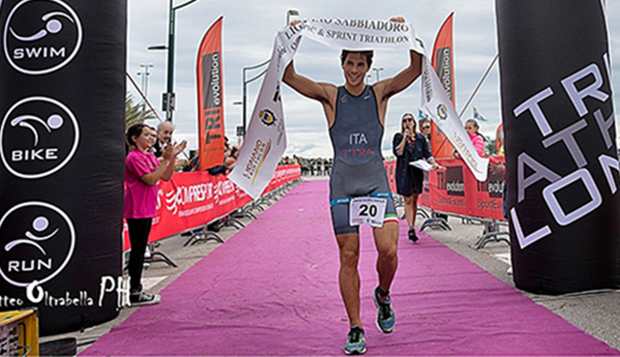 Giovanni Bianco, who will enroll as a graduate student next spring, is one of five international triathletes in Head Coach Parker Spencer's recruiting class.

The Liberty University men's and women's triathlon 16-member recruiting class for the 2016-17 season has a distinctively international flavor with four European triathletes and another from Guatemala in the mix.

"When you look at the level of the recruits and the amount of talent we have coming in, it is really remarkable," Head Coach Parker Spencer said, noting Liberty's administration is providing the program the resources and the facilities — including the new indoor track & field complex and natatorium due to open in November — it needs to be successful. "With these recruits and the returners that we have, we definitely have the program now that we've always wanted, and it's being noticed — not just in the U.S. but all over the world. It definitely is my intention to win three national championships," in triathlon, cycling, and men's swimming & diving, which will be introduced this fall.

Spencer met with incoming freshman Joan Colino, a junior regional champion from Valencia, Spain, before finishing fourth in his 25-29-year-old age group at the Barcelona 70.3-mile half Ironman triathlon on May 20. After staying in France with the family of rising sophomore triathlete Thomas Sonnery-Cottet to see him compete in Saturday's French National Championships, Spencer traveled to Urbino, Italy, on Monday to visit another recruit, Giovanni Bianco, who will enroll as a graduate student next spring.

"Giovanni, if you're trying to recruit top-level athletes to your team, he's at the top of your list," Spencer said. "He and has proven to be one of the best multisport triathletes in Italy, as the 2015 Italian Age Group National Champion in triathlon and fourth-place overall finisher in the 2017 Italian Duathlon National Championship. He has lots of potential and his impact on the team will be immediate."

He has also received commitments from Csabi Majoros — one of the strongest triathletes in Hungary who placed third overall at the 2016 Tiszaujvaros ETU Triathlon Junior European Cup — and Akos Takacs, the 2015 Hungarian Junior National champion in cycling and 2016 Hungarian Duathlon National Championship runner-up. Both will also compete on the Flames' cycling team starting in the spring.

Majoros and Takacs won't graduate from their respective high schools in Szeged and Tata until November, but both plan to fly to Lynchburg, Va., in late August to participate in the Flames' training camp and to stay on campus until early September to get to know the team and acclimate to life at Liberty before starting as full-time students in January.

"They are very, very eager to get started," Spencer said. "We won't have them here for our (Oct. 14 Mid-Atlantic) Conference Championships (at Smith Mountain Lake), but they will be on the team for the (USA Triathlon Collegiate) National Championships (next April in Tuscaloosa, Ala.)."

The fifth international recruit is Danny Fernandez from Guatemala, the younger brother of Charles Fernandez — a rising sophomore who has trained with Liberty's triathlon team after representing his country in the pentathlon at last summer's Olympic Games in Rio.

Spencer is also reaping the rewards of his experience as an endurance coach with Endorphin Fitness in Richmond, bringing three elite triathletes he formerly trained into the program — Bella Burke, a Junior Elite athlete from Nashville, Tenn.; Freddie Shashaty, from Richmond, who is transferring in from the University of South Carolina; and Nick Woods, a Junior Elite competitor from Washington, D.C.

Burke, who has extensive draft-legal and non-draft-legal triathlon racing, has trained under 2012 USA Triathlon Coach of the Year Michael Harlow, founder and director of Endorphin Fitness who coached Spencer from 2011-16.

Shashaty, who has participated in several of the same training camps and races as Liberty's current athletes, has made tremendous strides over the past year in both draft-legal and non-draft-legal triathlon racing and running — recording personal-record times of 4 minutes, 22 seconds in the 1,600-meters, 16:14 in a 5-kilometer race, and 1:13 in a 13.1-mile half-marathon.

Spencer is excited about the challenge of training top-level domestic and international athletes on a year-round basis.

"I'm very excited about it," he said. "The great thing for me is, when I look back over the last six years of my life, I really feel like God has orchestrated the path that I've been on to prepare me for where I am now."