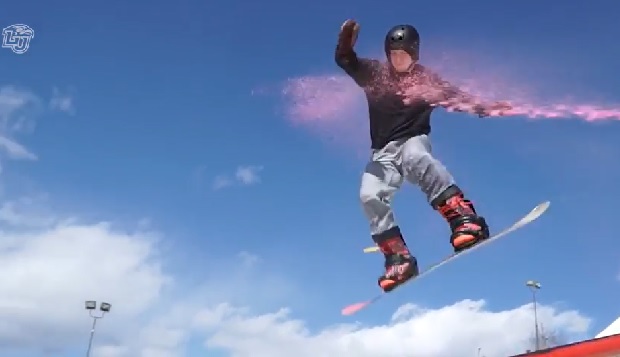 "It was a really good season," Liberty graduate snowboarder Kevin Hoff said. "We did great as a team. Southeast Region, we crushed it, and (USCSA) Nationals also went really well this year. As a team, we got third place in both Rail Jam and Slopestyle for snowboarding. We really are absolutely spoiled to have (Liberty Mountain) Snowflex (Centre) to practice on, so it's not really a surprise to us."

The men's ski team, which grew from two to seven members this past season, also excelled in the Mid-Atlantic Region and USCSA Nationals.

"We ended up getting third place in Slopestyle at Nationals as a team," Flames rising junior skier Jonathan Wong said. "That was the first time the ski team's ever placed at a national-level competition.

"It's crazy to think about it, that a team from Virginia — I didn't ski on any natural snow in Virginia this year— can go to Mt. Bachelor, Oregon, and compete against schools that have 400-plus inches of snow per season," he added. "Here we are skiing on the carpet provided by Liberty University and we're right at the top of our game with them and we can keep up and compete against them. It's really encouraging to be a part of a school that has a facility like this."

Liberty Head Coach Ryan Leeds said the team's rapid progression has put the Flames on the trajectory to challenge for national titles in the near future.

"It's definitely grown since we first established the team in 2009 and 2010," he said. "The past four years, we've been in the top three, on the podium, for Slopestyle and Rail Jam. We're beating out schools from Colorado, Utah, California, a lot of those out West in huge mountain resort towns. It's really exciting for a little ski/snowboard area like the Southeast to kind of put our name on the map like that. Everybody on the team is stoked to see the progression of the level of riding and skiing that's happened over the past several years. A top-three finish is something to be extremely proud of, but I definitely want to continue to push for that No. 1 spot. That's what we've had our eye on for the past couple of years and I think we can do it. It's just continuing to get more time on snow, continuing to get more time on bigger jump lines, continuing to push people to be more creative and more adventurous, if you will, in their skiing and snowboarding … We'll get that No. 1 spot in the next couple of years."

He said the exposure the Flames received through thei success in the Red Bull Reel Snow bracket challenge — a knockout video competition in which Liberty reached the Final Four on its first try — will help attract higher-level recruits in the future, as hosting the Next Level Summer Camps, which start June 18 at Snowflex, does.

"Competition skiing and snowboarding is fun because it allows you to kind of express your creativity in a different kind of way but it also pushes you to progress," Leeds said. "Filming and entering contests that are kind of different and unique is a whole other avenue, which is fun for us to explore and it's going to allow Liberty to get put on the map a little bit better … getting on nationally known websites like Transworld, Snowboarder, New Schoolers that a lot of people in the industry visit, competing for Red Bull, it's going to help people see the type of talent that's here, it's going to help our recruiting efforts, for sure, and it gets the guys that are on the team a little more excited."