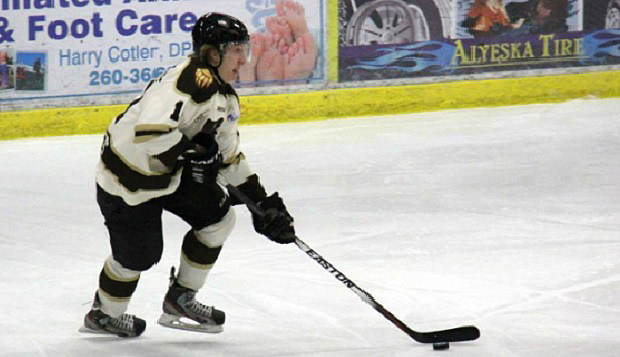 Sam Carlson skates the puck up the ice for the Kenai River (Alaska) Brown Bears of the North American Hockey League during the 2015-16 season.

Carlson, who will turn 22 in September, has been away from the game for more than a year after spending the spring semester serving the people in northern Africa through Midwestern Baptist Theological Seminary in Kansas City, Mo., where he enrolled last fall. He leaves Friday for his home state of Alaska, where he will work this summer as a commercial fisherman on a boat out of the capital of Juneau.

"There was not a lot of good ice time in northern Africa," said Carlson, a 6-foot, 3-inch, 210-pound forward. "I hope to bring positive energy to the team, through encouraging others off the ice or playing hard-nosed hockey on the ice."

Carlson expects his passion for the game to remain strong even after his experiences as a fisher of men in Africa and a fisherman off the coast of Alaska.

"There's a lot that hockey's taught me, about commitment and work ethic, and a lot of that can carry over to the mission field — to not grow complacent or lazy, and to just have all the values of the sport," he said. "I definitely still have a love for the game. It'll always be a part of my testimony and it has shaped me and made me who I am today."

He will lean on his teammates during the transition period and look to develop his all-around game under direction from Liberty Head Coach Kirk Handy and Associate Head Coach Jeff Boettger, who recruited him starting at an early age though his affiliation with Hockey Ministries International the Fellowship of Christian Athletes.

"One year, when I was really young, my family went to a hockey camp and Jeff Boettger was an on-ice instructor," Carlson said. "He's been a family friend through Hockey Ministries International."

Carlson attended FCA's summer camp in Buffalo, N.Y., in May of 2014 before playing in the Christian Cup in Minnesota that summer and the Chowder Cup in Boston last July.

"There's nothing individual in the sport of hockey," Carlson said. "It takes the whole team to score or to do anything."

He is excited to compete in a Christian atmosphere and to share his passion not only for the game of hockey, but also for Jesus Christ.

"It'll be an opportunity to build relationships and serve others and pour into others' lives and create a mission field for the community and for the guys to be able to be lights and role models for the youth hockey association there," Carlson said.

Handy is confident Carlson will adjust quickly to the college-level game and that he will work hard to be an example for his teammates to follow.

"What we really like about Sam is his 200-foot game," he said. "He has size and speed and has played at a high level. He comes from a very athletic family and he's someone we feel embodies exactly what we're looking for in a student-athlete. He's someone who brings the character we're looking for on and off the ice. He's a great student and a great fit for our culture."

Carlson is the youngest of seven siblings raised in Kenny Lake, Alaska, where he grew up playing hockey and hunting moose, caribou, and black bear before moving to Bemidji, Minn., prior to his junior year in high school. His father, Reed, an elementary school principal, would drive them five hours to Anchorage to play on some of the best hockey teams in Alaska when they weren't playing bush league games on nearby frozen lakes.

"With his sacrifice, the time he poured into us kids, we were able to develop and be successful in hockey," said Sam, who will be the seventh sibling to compete in collegiate athletics — mostly at schools in the Northeast.

His oldest sister, Sarah, played hockey at Boston College, serving as captain for her junior and senior seasons on the NCAA Division I program; Hannah followed suit at Bethel (Minn.) University, and his only brother, Isaiah, competed at Salve (R.I.) Regina University before his sisters Naomi and Mary both earned full scholarships to row on Syracuse's NCAA DI crew team. His youngest sister, Leah, who will start working on her master's degree at Liberty this fall, played four seasons of NCAA DI hockey and one season of NCAA DI volleyball for Robert Morris University in Pittsburgh.

"We're all super close, even though we're spread out in age," Carlson said. "It's been awesome having them as role models in my life."

He has received a similar calling as his oldest sister, Sarah, who graduated with a nursing degree before serving as a medical missionary in Liberia and Uganda.

"I look up to her a lot," Carlson said. "I also want to serve long-term overseas, and that's a big part of why I want to go to Liberty, to get a degree in a medical-oriented field that will equip me to make His name known to people who have not heard the Gospel." 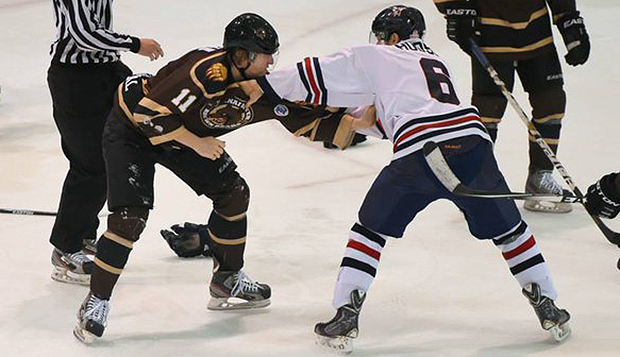 Sam Carlson mixes it up with an opposing player during a game with the Kenai River Brown Bears.