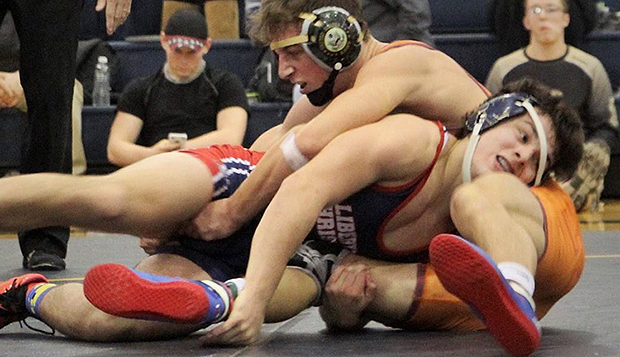 Chad Cantrell concluded his wrestling career at LCA with a 218-17 record and as a VHSL Group 4A state champion as a senior.

Two area recruits with more than 300 combined victories in their high school careers will help solidify Liberty University's wrestling team's lower-weight classes for the 2017-18 season, when the Flames will shoot to repeat or improve on their runner-up showings at the NCWA National Duals and NCWA Grand National Championships.

Blake Justis, who posted a 125-15 mark at Jefferson Forest High School in nearby Forest, Va., and Chad Cantrell, who went 217-18 over his career at Liberty Christian Academy, are expected to contend for starting positions at the 133- and 141-pound weight classes upon enrolling at Liberty in August.

"I've known Castro ever since I started wrestling and he's helped coach me along the way," Cantrell said. "Blake Justis is one of my best friends. He's been my sparring partner and we've always wanted to be on the same team."

"It's a nice perk having those guys familiar with us and what we're all about," Castro added.

Cantrell was a four-time state place-winner who capped his LCA career with a 46-1 record and a VHSL Group 4A state championship as a senior despite wrestling with a torn labrum and a small fracture in his shoulder, injuries he had surgically repaired this month.

"I fought through them," Cantrell said of his injuries, which are "pretty common in wrestling because of the positions you get in and how much torque it puts on your shoulders."

He is ahead of schedule in his rehabilitation and anticipates being ready to wrestle again this fall.

"I am looking to be cleared to wrestle after about three months of physical therapy, which I'm hitting pretty hard right now," said Cantrell, who plans to pursue a degree in business administration at Liberty. "According to the doctors, I should heal up just fine and be back to 100 percent."

Castro called Cantrell's accomplishments at LCA impressive, and expects his success to continue at the collegiate level.

"It shows he knows how to win and has the competitiveness to do well," he said. "We're going to take it cautious and think by the end of the year, we think he's all-American material and that he can make an impact as a freshman, notwithstanding the injury."

Justis, who formerly played baseball and football, also battled injuries throughout his career, including a fractured ankle that kept him from winning a state championship at 132 pounds as a junior.

"He's a really good lightweight, a four-time state place-winner and has come awful close to winning a title every single time," Castro said.

He plans pursue a degree in health professions with career goals of becoming a physical therapist. In the wrestling room, Justis hopes to emerge as a student-athlete others aspire to emulate.

"At Jefferson Forest, I've been a leader for my team, helping to run practices," Justis said. "I definitely want to help instill a good work ethic in my teammates."

While the Wiseman Wrestling Room adjacent to the visitor's locker room at Williams Stadium is being replaced as part of the expansion to bring the football facility up to FBS standards, the Flames will practice on the second floor of the former Macy's building in River Ridge Mall.