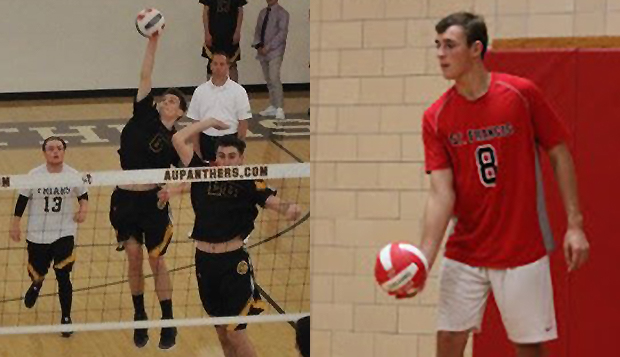 Cal Sartor, left, and Sean Taggart are expected to challenge for spots on the Flames' Division I squad as freshmen this fall.

However, in the case of incoming outside hitters Cal Sartor and Sean Taggart, who both play for Catholic high schools and established travel teams in Long Island and upstate New York, respectively, he may make exceptions.

"We are really excited about these two guys," Rigg said. "They are good passers, strong hitters, and they both have really high volleyball IQ's. They will be impact players right away. I wouldn't be surprised if one of them makes their way up to DI next year. Whereas a lot of freshmen come in and need a year of collegiate volleyball under their belt, as these two come in with more club experience, I feel like they're already more comfortable playing at a high level."

Taggart is a two-time All-Western New York first-team selection out of St. Francis. It was ranked in the top 10 in that region for the first time in five years this past fall. He also was a 6-foot, 3-inch center for the school's basketball team and was named the team's unsung hero as a senior. He chose Liberty over a number of NCAA Division I-III teams recruiting him to play volleyball because of its aviation program.

"Of all the guys that visited us this year, he had the best practice by far," Rigg said. "He was terrific. He's probably already at the level of where (rising seniors) T.J. (Forsyth) and Gene (Dejesus) are as an outside hitter."

Taggart practiced with the Flames before they entered postseason play and quickly assimilated with the team.

"The chemistry was already there and I felt comfortable playing with them, so I think I'll be able to mesh well with the team," Taggart said. "I was the go-to guy on my high school and club teams the last two years, so I knew I was going to get the ball and I just tried to bring energy to the team and keep it uplifted."

Sartor, who stands 6-feet, 4-inches tall, has been high on Rigg's recruiting list for the past year.

"We found him on a recruiting website and we just reached out to him and established a relationship about a year ago and it's been growing," Rigg said. "He's really athletic, and a great passer and hitter. His club team placed 25th at nationals this past year and he was the main guy."

Coming from St. Anthony's, one of the largest high schools on Long Island, Sartor visited Liberty for its "Midnight Mayhem" victory over Virginia Tech — a three-game sweep in the Vines Center on Jan. 28.

"I loved the atmosphere and the big campus and I'm very excited for my future," he said.

Also a wide receiver on St. Anthony's football team, Sartor served as team captain in volleyball for the past two years, earning the Most Improved Player award as a junior and MVP honors this spring. He played on the Garden Empire Volleyball Association's 17-and-under team that went undefeated at last summer's High Performance Championships in Fort Lauderdale, Fla.

"That was a really good experience and I learned a lot from that about myself as a player — what my strengths are and what I needed to work on," Sartor said.

He is looking to emerge into a leadership role at Liberty.

"With the high level of competition I've played at, I hope that the skills I've learned over the time I've been playing volleyball, I hope my talents can help the team get into the (gold) bracket at nationals," Sartor said.