Power forward from Edmonton will bring game to the Flames 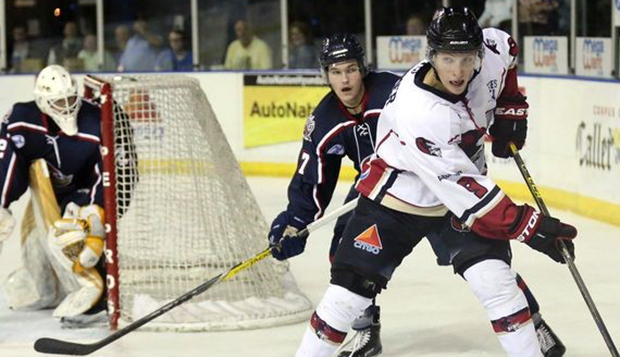 Cole Gammer, a 20-year-old power forward from Edmonton, Alberta, learned about Liberty University's men's hockey program through on-ice training sessions last summer with Paul Lamoureux, a rising senior for the Flames who's from the same area of western Canada.

Gammer, who has played in both the Canadian Junior Hockey League and the North American Hockey League, flew into Lynchburg, Va., for a campus visit last week and committed to Liberty on Thursday.

"I loved everything I saw and heard nothing but good things about the fan support," Gammer said. "I'm really excited to start the next chapter of my life at Liberty and to study at a world-class Christian university."

He got a chance to meet a few of his future teammates and a couple graduating Flames seniors, as well as DI Head Coach Kirk Handy, Associate Head Coach Jeff Boettger, and Assistant Coach Dan Berthiaume.

"They all seemed like great guys and it's cool that the coaches are all from Canada as well," Gammer said. "They all know the game and they're coming off a big season with the (ESCHL) conference championship, so I'm excited to bring a bit of an offensive spark to that team. They like my size and my offensive upside."

At 6-feet, 2-inches tall and 200 pounds, Gammer has bulked up over the past few years and was eager to get started in his off-season training following a workout plan detailed by Liberty Club Sports Strength & Conditioning Coordinator Chris Kerr.

"Chris started asking me questions about my training regimen right away," Gammer said. "I'm excited to meet someone like that who's so motivated to see improvements throughout the season. He spoke a lot about maintenance and injury prevention which is something that's huge for me for next season."

Gammer, who plans to study Business or Exercise Science, hopes to be a physical force on the Flames' front line, giving them a potent scoring threat down low.

"I'm a big forward that likes to have the puck down low and is good at finishing in tight around the net," he said. "I like to shoot the puck. I have a good shot. I'm not going to come in afraid. I want to come in and make an impact right away. I've seen freshmen do that in the past. I want to prove myself and once I do that, start contributing."

After scoring 17 goals and distributing 16 assists in 54 games with the Canadian Junior A Sherwood Park Crusaders in the Alberta Junior Hockey League in 2014-15, Gammer missed all but 19 games of the 2015-16 season. He was sidelined by a mid-ice collision that left him with a head-neck injury that was exacerbated by a car crash three weeks later. His recovery took more than six months before he returned to the game, joining the Corpus Christi (Texas) IceRays in the North American Hockey League.

"It was definitely a process and there were some definitely dark times with concussions and the neck injury, but I'm back to 100 percent now and feel like my game's completely back to where it was before," Gammer said. "This year, I was at full strength. There were no complications at all. It was really huge to have a good full season and stay healthy. I'm just really excited to come to Liberty."

He is looking forward to developing his game while growing in his faith.

"I've grown up a Christian my whole life and it'll be really cool to come to Liberty and play amongst other Christians," Gammer said.

His mom comes from a hockey home and pushed for him and his younger brother Brett to try the sport.

"My dad ended up falling in love with it," Gammer said. "He loves watching us play and driving us all around when I was a kid. I have a backyard rink at home where I've spent a whole lot of time shooting pucks and playing against my brother, one-on-one. He's a forward, too, and it's fun going head to head."

That sibling rivalry extends to players on opposing teams in the heat of battle.

"I'm pretty outgoing and I don't really have any enemies," Gammer said. "I'm a super competitive person, but as soon as the game's over, I put it behind me."

He plans to arrive at Liberty in August prepared to earn his playing time and the respect of his teammates.

"I'm going to show up with my work boots on and be ready to play," Gammer said.