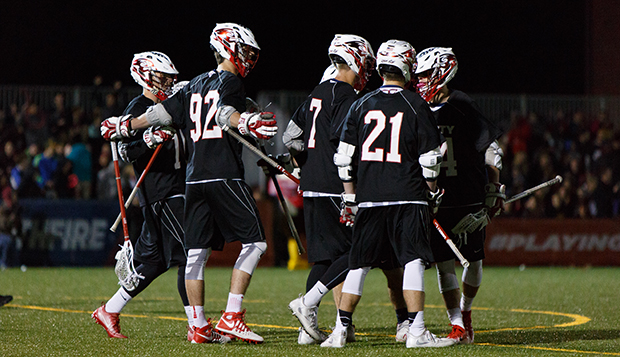 Freshman attack Caleb Britton (92), who led the Flames and ranked sixth in MCLA Division I in scoring this season, gathers his teammates at midfield. (Photo by Caroline Cummings)

For the fourth season in a row, Liberty University's men's lacrosse team narrowly missed qualifying for the 16-team MCLA Division I National Championships, taking place next week in Orange County, Calif. The SELC will have three representatives at nationals, the most in the conference's history.

The Flames (8-7) moved up three spots to No. 18 in this week's Coaches Poll after defeating Florida State 10-9 in overtime in the first round of the SELC DI Tournament and advancing to the final with an 18-5 rout of Auburn before falling to No. 3-ranked Georgia Tech, 13-8.

Besides the Yellow Jackets and Virginia Tech, which edged Liberty 14-13 in triple-overtime to clinch the Northwest Region regular-season title on April 15, Florida State, which dropped three spots to No. 12 in this week's poll, made the national tournament field after the MCLA made an administrative decision to replace the Great Rivers Lacrosse Conference's autobid with the Seminoles.

"We beat them twice, but they were ranked ahead of us," Liberty Head Coach Kyle McQuillan said. "They only had three losses on the year and two of them were to us. They did not have as strong a schedule, but they had a big win (in their season-opener at) Arizona State, which was ranked seventh in the country at the time and they were riding that high."

Even after having their upset bid denied by the Hokies in triple overtime, Liberty missed an opportunity to earn the SELC's autobid to nationals by upsetting Georgia Tech in the tournament final.

"If we didn't have motivation, we've got more now," McQuillan said. "We fell a little bit short and, obviously, we're upset that we've got to watch (nationals) from home again this year, but we feel good about it because we've got a crazy young team and we're excited about next year. Making the championship game in the SELC with 14 freshmen playing a lot of minutes and being a big part of our team, we're happy, but we know we've really got a lot to prove in the next few years."

McQuillan will travel to California later this month help lead two summer lacrosse camps as well as a couple more on the East Coast before Liberty hosts an overnight camp from July 9-14 and a day camp from July 20-22 in conjunction with the Commonwealth Games lacrosse tournament, to be held on the Liberty Lacrosse Fields.

"We're getting a lot of our talent from Virginia and starting to branch out to California," he said. "We've got another great class coming in, so once the fall semester rolls around, we'll be ready to go."