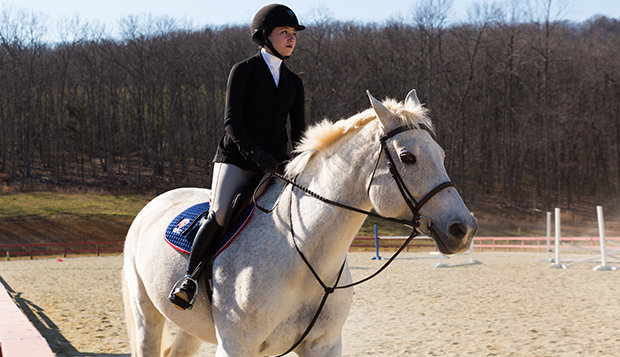 Senior Hunt Seat team captain Elizabeth Chenelle will become Liberty University's first equestrian rider ever to compete at the Intercollegiate Horse Show Association (IHSA) National Championships in Lexington, Ky., on Friday as one of 41 Cacchione Cup winners, the high-point open riders from their respective regions around the United States.

She won't be the only Liberty representative at the prestigious event, however, as three of the program's horses were among the 90 invited out of hundreds nominated for the honor of being ridden in the national championships. After two days of audition rides, Liberty horses Uccello and Cardina were two of 60 selected to be used while Honey Badger did not make the cut.

Uccello and Honey Badger, appraised at $225,000 combined, were both donated to Liberty by the Kowalchik family of Cincinnati, Ohio. They were formerly ridden by three Kowalchik daughters who Liberty Head Coach Jim Arrigon instructed at Beckett Run Farm in Ohio before he started as executive director of the Liberty Equestrian Center in 2015.

Coincidentally, the daughter who formerly owned Uccello, Mollie Kowalchik, will be competing at nationals for Mount Holyoke (Mass.) University.

"It is possible she could ride her horse as it will be entered in her same class," Arrigon said.

Cardina was given to Liberty by Lynne LaGuardia of Connecticut.

On Thursday's opening day of IHSA nationals, Liberty junior Hunt Seat rider Emily Chafins was selected as the recipient of the IHSA Emily Hilscher Memorial Scholarship, named for the Virginia Tech equestrian rider who was the first victim of the April 16, 2007 mass shooting on the Blacksburg, Va., campus. It was the second consecutive year that a member of Liberty's equestrian team received the scholarship after Western team rider Micah Armbrust ('16) was awarded it last year.

Steptoe was a second-year first-team Academic All-American and was joined by teammates Chafins and sophomores Ellen Lipford and Hannah Peterson, who also made the first team for the second straight year, as well as freshman honorees Kaitlin Donnelly and Charles Fernandez, who represented Guatemala in the modern pentathlon at last summer's Olympic Games in Rio.