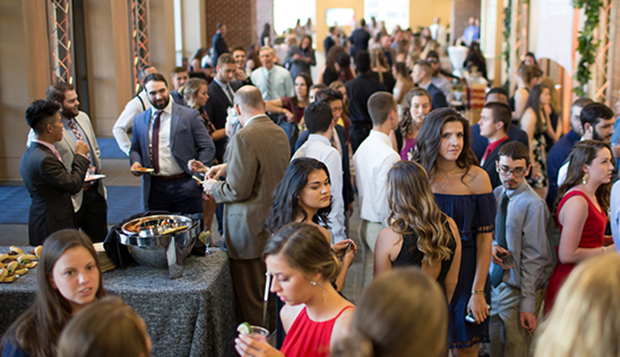 Liberty University's Club Sports department raised the bar for Wednesday night's annual end-of-the-year awards ceremony, dubbed the Choice Awards. The semi-formal affair was staged in the new Center for Music and the Worship Arts Concert Hall, following a reception with hors d'oeuvres and desserts in the main entrance foyer.

"It was amazing," said Mike Morrison, Club Sports' director of internal operations. "We wanted it in a different venue and a different style (this year). It's going to be hard for (Club Sports Assistant Director of Recruiting & Special Events) Kaycee Tripp to top this next year."

The awards ceremony was hosted by LFSN "Game On" sports anchors Rett McGibbon and Matt Warner, who introduced the winners of a wider variety of awards than in years past.

"(McGibbon and Warner) added some humor and people seemed to enjoy it," Morrison said. "It was great to have the videos and the music. (Club Sports Assistant Director of Video & Media) Pat Strawn and (Video Coordinator) Gabe Henderson did such a good job."

They produced a highlight video encapsulating the year in Club Sports and recorded video intros for all 43 candidates for the 15 awards, narrated by Mike Zumpano, assistant director of business operations.

In the 2016-17 school year, 23 of Liberty's 37 Club Sports advanced individuals or teams to compete at the national level.

President Jerry Falwell and his wife, Becki, congratulated all Club Sports student-athletes for their pursuit of excellence through a video message.

The Lady Flames' ACHA DII women's hockey team, which ranked sixth in the league in scoring this year, captured the Breakthrough Award while DI women's hockey graduate captain Carrie Jickling, who led the Lady Flames to their third ACHA National Championship game in five seasons, was tabbed the Women's Athlete of the year.

Men's triathlete Thomas Sonnery-Cottet, a freshman from France, earned Rookie of the Year honors while senior women's triathlete Megan Merryman, last year's Women's Athlete of the Year, earned the Performance of the Year award for her sixth-place showing at the Nov. 5 NCAA Women's Triathlon National Championships in New Orleans.

Senior equestrian rider Cassandra Steptoe was awarded the Academic Athlete of the Year as one of only handful of Club Sports student-athletes who maintained a 4.0 grade-point average throughout their four-year careers. A total of 39 student-athletes currently sport 4.0 GPAs with 148 more carrying at least a 3.5.

Sophomore figure skater and synchronized skater Katherine Thacker received the Community Service Award. Thacker, whose father was a police officer who died in the line of duty when she was 10, organized a letter-writing campaign on campus for students to reach out to families of fallen officers.

Senior women's Ultimate player Jillianne Hook, who recovered from surgery on malignant melanoma skin cancer that sidelined her for much of the fall semester, was given the Perseverance Award. Katie Shadish, who performed an Athletic Training practicum, was honored as the Student Service Award winner.

Liberty women's Ultimate Head Coach Jonathan Mast was selected as Coach of the Year after guiding the Lady Flames to their fourth consecutive Mid-Atlantic Regional championships, set for this Saturday and Sunday in Axton, Va. Mast helped found the program as a junior in 2010, along with former Head Coach Jason Jarrett.

"We decided that winning and losing is fleeting, so in the long run we were going to try to make character development the thing that we focused on as far as something you could take away from your sport," Mast said. "Winning is sweet, but 10 years from now, you're probably not going to remember it. What habits you develop and character you learn through the sport you're playing, that you will take with you for the rest of your life, so use your sport for that."

Before and after the awards ceremony, representatives from the Varsity Club, which is open to Athletics and Club Sports student-athletes, offered memberships to graduating seniors as a way to encourage them to stay connected to the program and the university.