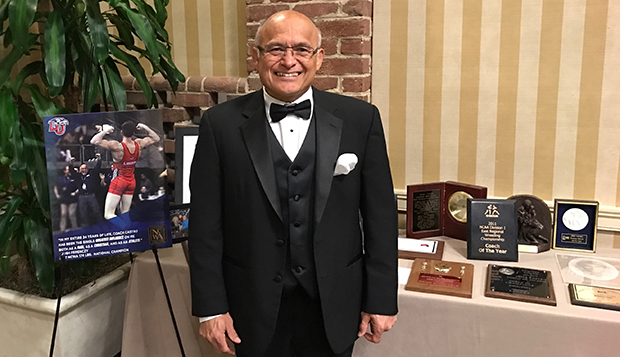 Liberty University Head Coach Jesse Castro was one of eight recipients of the Lifetime Service to Wrestling Award at Saturday night's induction ceremony for the Virginia Chapter of the National Wrestling Hall of Fame, held at the Wyndham Virginia Crossings Hotel in Glen Allen, Va.

"He's the founder and it's always been the objective over the past 12 years I've spent here to maintain the vision that Coach Bonheim cast in 1973," Castro said. "It was really special to have him present, and for me to be honored and the program to be recognized like that was exciting. No one really sets themselves up as a goal to receive an award like this. It was the byproduct of 47 years of my life."

"It was pretty awesome and it's always nice to be recognized," Castro said. "I talked about my personal journey, starting out as a 12-year-old in the sport, making my way out to Liberty from the West Coast, how wrestling helped formulate my world view, and how (former Head Coach Bob Bonheim) helped mentor me along the way."

Bonheim, who recruited Castro to Liberty in 1976, attended the ceremony and talked about the four-time National Christian College Athletic Association (NCCAA) national champion's influence on the program as a wrestler and later a coach. Castro was his graduate assistant for three years before spending two seasons as an assistant coach under Don Shuler and the past 12 seasons as Liberty's head coach — at the NCAA Division I and NCWA levels.

Castro was a four-time NCAA East Region coach of the year and led the Flames to five consecutive East Region titles before guiding Liberty to two NCWA National Duals tournament titles in 2012 and 2015 and its first NCWA Grand National Championship crown in 2015.

Among the 250 people who attended the ceremony were his whole family, former wrestler Brandon Lawrence ('12) and his wife, and Liberty Associate Athletics Director for Development Bob Good, who wrestled for Castro in the mid-1980s.

Other Lifetime Service Award inductees were Mel Ardis, an official from Richmond; Ray Bousman, official and coach at Norfolk Academy; Jason Bryant, a broadcast journalist from Norfolk who has announced NCAA Division I and Olympic tournaments; Gary Embry, a long-time coach at West Springfield and Edison high schools; and Ann and Bob Wood, longtime wrestling supporters. Buddy Lee, a two-time All-American at Old Dominion and 1988 U.S. Olympic team member, now a motivational speaker and jump rope guru, received the Outstanding American award. Fauquier High School's Doug Fisher was named coach of the year, and Dave Pause was honored as official of the year.

Castro has visited the National Wrestling Hall of Fame in Oklahoma City three times. The next time he travels there, his plaque will be on display in the Virginia Chapter's section.