Flames extinguished by No. 3 Yellow Jackets in SELC final 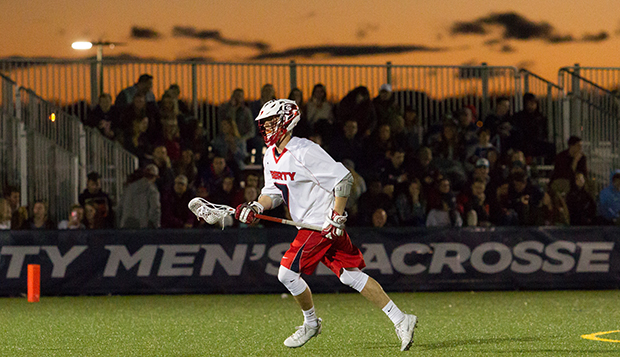 Freshman midfielder Derrick Esh brings the ball upfield as the sun sets during the Flames' win over Florida State, March 31 at home. (Photo by Caroline Cummings)

As the storm that delayed the game for 20 minutes in the first quarter continued to unload heavy rainfall in the second half, the No. 3-ranked Yellow Jackets scored six unanswered goals in the third quarter to turn what appeared to be a defensive duel into a 13-8 victory.

The Flames (8-7, ranked 21st in the MCLA) overcame an early 2-0 deficit to take a 3-2 lead on the Yellow Jackets (15-1), with the tying and go-ahead goals scored by sophomore attack Sam Gregory (two goals, one assist), set up by freshman attack Caleb Britton (1G, 1A) and freshman midfielder Derrick Esh (1G, 2A), and Britton, after Esh dodged a defender and set him up on the left side with 4:29 remaining in the first quarter.

Senior midfielder Holland Frost drew a double team before feeding a pass across the crease to freshman midfielder Gabe Banks who tied the contest at 3-3 with 2:27 left in the second quarter before Georgia Tech opened up the floodgates and pulled away in the second half, denying the Flames their first SELC Tournament title and automatic bid to next month's MCLA National Championships in Southern California.

"We played a whole lot of defense in the third quarter," McQuillan said. "We didn't win a whole lot of faceoffs and made a number of unforced turnovers. Rain was definitely a factor for both teams, and created a lot of ground balls and some sloppy play on our end. We didn't do a good job controlling the ball and gave Georgia Tech so many opportunities on the fast break. That was our Achilles' tendon tonight, as at least half of their points came on transition."

Freshman Jimmy Fowler relieved senior faceoff specialist Jacob Campbell in the fourth quarter and won four of his six attempts in the circle.

"Jimmy came in during the fourth and our offense was able to turn those faceoff wins into some goals to apply some pressure late," McQuillan said. "We continued with our game plan and were able to continue having some success. Unfortunately, Georgia Tech had already created enough of a lead to fend off our comeback."

Freshman midfielder Carter Elliott scored four goals to lead Liberty's attack, taking advantage of a teammate's pick across the top of the box to score on a high-to-low shot that cut the deficit to 12-6 with 3:56 left in the fourth quarter. Esh drew the Flames within 12-8 two minutes later before Banks scored an empty-netter with Liberty's goalie trying to force a turnover on a double team.

The Yellow Jackets were the ninth ranked-team the Flames had faced this season. Ranked opponents accounted for all seven of Liberty's losses, with its two wins over Florida State the first two for Liberty over a top-10 team since moving up to the Division I level in 2014.

"Hands-down, this was definitely the most difficult schedule we've ever faced and you can look at it two ways," McQuillan said. "Either it was too much for this young team to take on and we bit off more than we were able to chew, or the amount of growth we've seen in this team in just in one year makes us very confident and gives us a lot of things to look forward to next year as we continue to build on the success we've had. Either way, this loss will be hard to swallow."

He and his players and coaching staff are still holding out hope for an at-large bid to represent the SELC for the first time at the MCLA Division I National Championships. Besides Georgia Tech, the two SELC teams ranked ahead of the Flames are Florida State, which lost to Liberty in the quarterfinals, and Virginia Tech, which won a triple-overtime showdown on April 15 in Blacksburg, Va., before losing to the Yellow Jackets in the SELC semifinals.

"This year, it's a pretty tight fit in order to squeeze into nationals with an at-large bid," McQuillan said. "There are a lot of really good teams around the country and we'll definitely be in the mix with our strength of schedule, but we'll have to wait to see how things pan out. It could be the same story as the last few years, of being on the bubble, but left out and looking in."

The Flames graduate only three seniors — Campbell, attackman Nick Lombardozzi, and defender Brett Wood — and have a solid foundation coming back from their freshman and sophomore classes.

"Those three guys all played very big roles for us, but we definitely feel confident and prepared to take on the challenges and feel good about our chances next season," McQuillan said. "Looking forward, the future looks bright."