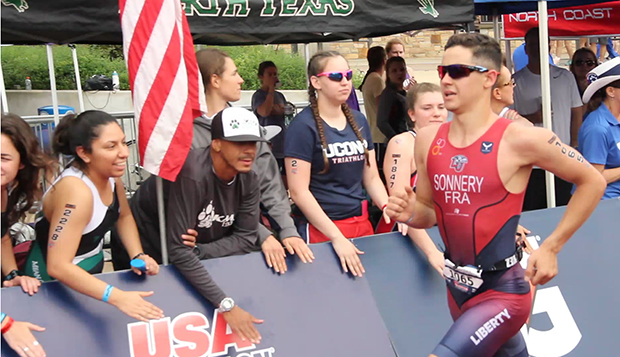 Thomas Sonnery-Cottet approaches the finish line of the 10K run, Saturday in Tuscaloosa, Ala. (Photo by Patrick Strawn)

Flames freshman Thomas Sonnery-Cottet was assessed a four-minute penalty for riding too close to the middle of the road on a bridge crossing and a two-minute violation for racking his bike incorrectly after the cycling stage. Those six minutes added onto his time dropped him from sixth place to 33rd overall out of nearly 700 finishers, still first for Liberty in 2 hours, 2 minutes, 15.83 seconds on the 1,500-meter swim, 40-kilometer cycling, and 10K run course.

"You live and you learn through different experiences," Flames Head Coach Parker Spencer said. "Thomas was in second until the last 1K and he kind of hit a wall and a few guys passed him. He was the youngest guy in the top 10 and he still did an incredible job as a freshman in this race. Between (Friday) and today, he definitely proved he's one of the best collegiate triathletes in the United States."

"It definitely wasn't what we were hoping for, but we've got a young team, use this experience to put a little more fire in the belly, so when we come back in a year, we'll know the course and be smarter about the penalties," Spencer said.

Liberty entered 11 triathletes in the men's race, which started at 7:30 a.m., and five females in the women's race that followed at 10:20 a.m., with temperatures climbing to 90 degrees by the time most finished. Lady Flames senior Megan Merryman did a remarkable job to come in 16th out of more than 450 triathletes, collapsing in exhaustion immediately after completing the course.

"She was overheated and passed out after she crossed the finish line," Spencer said, noting that she spent more than two hours recovering in the medical tent.

Merryman, who placed sixth in the NCAA women's national championship race in New Orleans on Nov. 5 and turned professional in the sport in January, competed with a metal plate in her collarbone which she fractured on a cycling crash during the Clermont (Fla.) Draft-Legal Challenge in early March.

"For her to place way she did, it was absolutely incredible," Spencer said. "She did a fantastic job overall. It was a great experience for a young team and a good way for Megan to end her senior year. She raced like a pro. Professionals collapse at the finish line all of the time because they get absolutely the most they can out of their entire body. She raced her heart out, as hard as she could race, and I couldn't be more proud of her. She did awesome."

Spencer, who will compete in a Half-Ironman distance triathlon on May 21 in Barcelona, Spain, plans to stay with Sonnery-Cottet's family in the foothills of the Pyrenees Mountains to watch him race in the French National Championships on June 3, when he will try to qualify to represent his homeland in the World Triathlon Championships. While there, Spencer, who has already recruited athletes for next year's team from New Zealand and Hungary, will continue his recruiting efforts in Spain, France, and Italy.