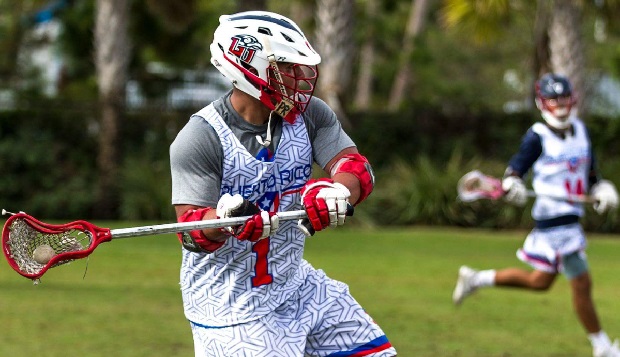 Former Liberty University men's lacrosse standouts Nate Lowmaster ('13) and Miguel Lozada ('14), who helped spark the revival of the Flames' program in 2010, have taken the initiative to start a Federation of International Lacrosse (FIL) program in Puerto Rico, serving as president and secretary, respectively.

"It's a passion of ours," said Lowmaster, a business administration graduate who is a police officer and works with his wife in the real estate market in Corning, N.Y., while Lozada is pursuing a law degree at Hofstra University on Long Island. "Miguel and I are spearheading it and we launched it, but we've surrounded ourselves with a really strong, passionate support system."

Both Lowmaster and Lozada played on the first team at Liberty after the program was discontinued in the aftermath of a serious accident on a 2005 road trip through Alabama.

"That's how we became lifelong brothers and teammates," Lozada said. "That was a great first-hand exercise in believing in something with a bunch of guys, fighting for one goal and seeing it come to fruition. At Liberty, we got that going in four years, and that experience helped us continue through the hard times with our dream at Puerto Rico. The No. 1 thing we can model from Liberty and bring there is the culture and tradition."

He said the sport helped him form an instant bond with his teammates as a freshman at Liberty.

"Once lacrosse got started, I had 30 friends right off the bat," Lozada said. "Being with them on the weekends, I had constant accountability and encouragement. Working with those guys was a huge life lesson in my life. We're not going to be afraid to take on something so big as this because we've seen it done on a smaller scale. And if we believe and trust that this is what God wants us to do, it's going to happen."

According to their mission statement on the program's website, the club seeks "to inspire the people of Puerto Rico, and provide hope, passion, and purpose, using lacrosse."

Flames Head Coach Kyle McQuillan is thrilled to see his former players take on such an ambitious task and to model it after the program they helped revive at Liberty.

," he said. "When I first heard what they were anticipating doing, and talked a little bit about what their vision was and what their goals were, I definitely recognized how big a feat this would be. Those two love lacrosse and are passionate about Puerto Rico and to see them bring those two together is pretty awesome."

Lowmaster's wife is from Puerto Rico and Lozada is a native of the United States territory whose younger brother, Isaac, is currently a freshman midfielder for the Flames. Together, they are on a mission to introduce the sport to youth and high school-aged players on the island and others currently living in the U.S. mainland.

"Half a million people have left the island over the past 10 years because of lack of job opportunities," Lowmaster said. "We're trying to encourage more opportunities for people to stay in Puerto Rico, to bridge a gap. Lacrosse has a phenomenal power to unite a community. We use the game as our tool to give back because it has provided us so much opportunity."

Besides developing a self-sustaining lacrosse program on the island, they have a goal of recruiting and training a Puerto Rican national team to compete in the 2018 FIL World Championships, set for July 12-21 in Manchester, England. Miguel Lozada is trying out for that team while Isaac Lozada plans to play on the U19 squad this summer.

The PRLAX program recently named its first head coach, Jeffrey Ramos, a former attackman at Alfred (N.Y.) University and a founder and director of two youth programs over the past 15 years.

High school and middle school coaches in Puerto Rico are instilling a love of the sport and teaching it in local clinics, including some conducted by PRLAX Coach/Administrator Joffre Salazar, known as "Coach Sal," Lowmaster's and Lozada's primary contact on the island.

Liberty's lacrosse team has collected gear for Lowmaster and Lozada to take with them on trips to Puerto Rico for the past year and a half and McQuillan has entertained the idea of sending the Flames to the island over the summer to conduct clinics and support the fledgling FIL program.

"Lacrosse is a sport a lot of countries can get behind financially," he said. "It's a fun sport to play and provided the right resources and equipment, a lot of countries would have success with it. Being able to field a team that can compete on a world stage is their big holy grail, and once they can do that, it will give them a goal to grow toward."

In their domestic player recruitment efforts, Lowmaster and Lozada have targeted strategic locations up and down the East Coast where the Puerto Rican population is highest. They have held lacrosse assessments and tryouts in Brooklyn, N.Y, and near Miami, with another set for May 26-29 in Foxborough, Mass.

Lozada would like to see the FIL program become an outreach to his homeland, creating spiritual fellowship opportunities as well as developing Christian character and team-building skills through the sport.

"We want to find a way to bring the gospel and motivate kids to play sports again and have a dream, developing life goals," he said. "We're starting to see that happen in Puerto Rico, essentially forming a culture and a family."

Nathan Lowmaster (top left) and Miguel Lozada (second from right in front ) pose with their team.