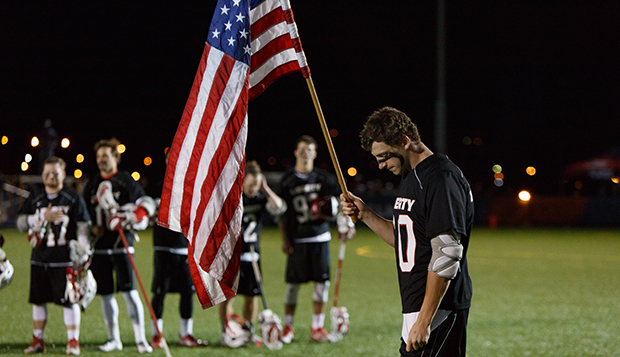 Freshman midfielder Carter Elliott is one of several young players who have taken up the banner for the Flames this season. (Photo by Caroline Cummings)

Since the start of the season, Liberty University's men's lacrosse team realized the surest path to securing its first trip to the May 8-13 MCLA Division I national championships in Orange County, Calif., would be winning this weekend's SELC Tournament near Atlanta.

The Flames (6-6), who slipped two spots to No. 21 in this week's MCLA Division I Coaches' Poll after this past Saturday's 14-13 triple-overtime loss at No. 11 Virginia Tech, must navigate a difficult road to win their first SELC Division I title — one that's nearly as challenging as their regular-season slate that featured seven opponents ranked in the top 25.

Four of the eight teams in this weekend's tournament field are ranked, including Liberty's first-round opponent, No. 9 Florida State, which it will face off against Friday at 8 p.m. at Mount Pisgah High School in Johns Creek, Ga.

"The SELC Tournament this year is the deepest it's been in a long time," Flames Head Coach Kyle McQuillan said. "It'll be tough to beat a good team, especially a team that's ranked in the top 10, twice in a season."

The Flames upset the Seminoles 11-7 on March 31 to extend their winning streak at the Liberty Lacrosse Fields to 25 games. Liberty has won both meetings with FSU in the SELC Tournament — in the 2014 semifinals before losing to Virginia Tech in the championship game, and in the 2015 quarterfinals before falling to Georgia Tech in the semis.

If the Flames can get through their half of the bracket, they will most likely meet either Virginia Tech (13-3) or third-ranked defending tournament champion Georgia Tech (12-1) in Sunday's 3:30 p.m. title matchup.

First, Liberty must slow the Seminoles down to survive and advance past Friday's opening round and set up a semifinal showdown against the winner between unranked Auburn (4-7) and Clemson (13-1). FSU won the two times it has played the Flames in Tallahassee, Fla., including a 17-16 shootout over Spring Break last March 17.

"That's the type of situation we want to avoid getting ourselves in, because they're able to get points in rapid succession," McQuillan said. "They're great in transition. We can run with them, but we have more success and it plays to our strengths to slow the pace down and be a little more patient. If we can control the clock and ball possession and minimize our mistakes, we should have the upper hand."

Liberty will need to experience better success on faceoffs than it did at Virginia Tech to help swing time of possession in its favor.

"(The Seminoles) have a good faceoff guy, so that will be a focus for us," McQuillan said. "In practices this week, we've been working on different looks and options we can go to on faceoffs. We can also do a better job of creating turnovers and playing good solid defense and capitalizing on our offensive opportunities to put them in a position where they feel pressure to speed the game up."

While getting into a fast-break battle against the Seminoles could backfire, it also might be what it takes to stage a comeback should the Flames fall behind early.

"We have to win three games in a two-and half days, but we want to focus on one game at a time and if want to win, we might have to pull out all of the stops," McQuillan said.

While the Flames are flirting with the .500 mark, McQuillan has witnessed tremendous improvement from his young team throughout the season, particularly against Virginia Tech, a team they lost to 14-4 in a fall scrimmage in Lynchburg.

"It's tough to try to turn a loss into a positive, but there were definitely a lot of positives in (Saturday's) game," he said. "The freshmen have bought in and stepped up their play and the amount of work and amount of progress they have shown to be able to close the gap in less than one year is impressive. We've put a lot on their shoulders, as well as on the rest of the team, and they have come a long way."

The four SELC Division I quarterfinal games are being played at the same time at different locations to assure that no team gains an advantage in scouting their opponents for Saturday's semifinals, set for 5 and 7:30 p.m. at Northview High School.

Semifinal and championship games will be streamed live by the SELC.