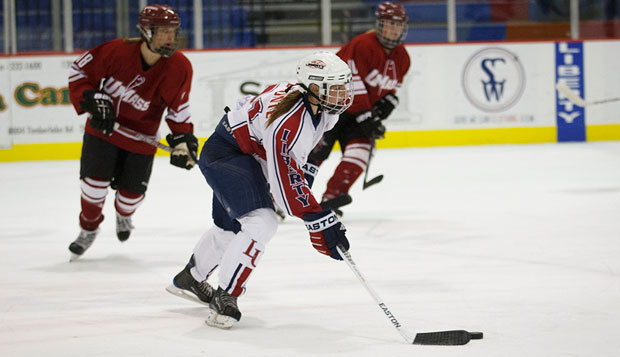 The Lady Flames Division I hockey team successfully defended its home ice against the University of Massachusetts this weekend, completing a two-game sweep of the Minutewomen with a 5-3 victory Saturday and a 5-4 win Friday night.

Both teams made a strong defensive effort in the opening period Saturday. Liberty's Madison Fincher managed to put one in with just 38 seconds left to get the home team on the board first.

Stacey McCombe, coming off a stellar performance the night before, scored with just under eight minutes left in the second period on an assist from Carly Peleshok to up the margin 2-0. The Minutewomen scored nearly two minutes later, cutting the margin in half.

The Lady Flames came out hot in the third period, and just 23 seconds in, Autumn Kucharczyk found the back of the net, assisted by Sarah Stevenson. UMass' Meghan Crosby slimmed Liberty's lead back to one at 15:38. With five-and-a-half-minutes to go Peleshok put up her second goal of the contest off an assist from Kucharczyk and Stevenson. McCombe put another one past the goalie with less than two minutes of play remaining, giving the Lady Flames a 5-2 advantage. UMass scored again with 7.7 seconds on the clock for the final margin.

The Lady Flames make a trek to the Midwest next week for a pair of two-game series, first against the University of Minnesota in Madison, Wis., Nov. 16-17 and concluding with the University of Wisconsin at the same venue Nov. 19-20.