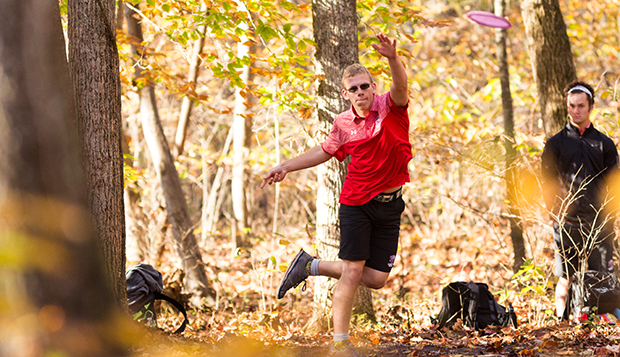 "We stayed steady and everybody played really well," Flames Head Coach Steve Bowman said. "Today was all doubles, and we didn't take many gambles, but we had a couple younger guys playing with older guys and they competed like they've been practicing a long time so that was great."

"Singles is where we usually struggle, but we played better this tournament, score-wise," Bowman said. "The younger guys are really excited for next year. They know what they have to do to put the work in to make their games better."

Liberty's Second Flight team stayed in fourth place out of eight teams while its First Flight lineup, led by Zach Biscardi (tied for 14th out of 65 players) combined to shoot a 7-under-par round on Saturday to move ahead of Mississippi into a tie with Oregon for sixth place out of 16 teams with 746 total throws.

"This was our transitional year, and next year's going to be a big growth year, and an opportunity to make a big push at nationals," Bowman said. "They're learning the game at this level and it's awesome to see them dig down deep and compete and want to improve their games. That's encouragement for a coach."

For eight of the 12 Flames that made the trip, this was their first trip to the Hippodrome courses.

"That was a big disadvantage for them, but the other guys taught them where things were and we got here in plenty of time to practice a good five hours on Tuesday and four hours before starting on Wednesday," Bowman said. "I was really happy with the way the guys performed and how hard they worked. Everyone's excited for next year."