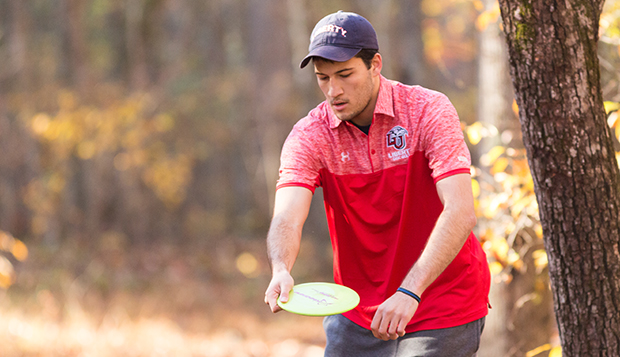 The Flames are one of the few at this week's national event with a men's Championship as well as First and Second Flight teams entered into the four-day tournament, held at the Hippodrome Disc Golf Complex in North Augusta, S.C.

After earning an automatic bid to this week's event by placing seventh at last year's national championships, the Flames' championship foursome will tee off at 11:30 a.m. for Saturday's final round.

In the First Flight, senior Zach Biscardi tied for 14th at 5-over 116 to lead Liberty to a seventh-place showing out of 16 teams through the first of two rounds at 29-over 693. The Flames' Second-Flight team placed fourth out of eight teams at 17-over 559, sparked by Jeremy Miekley first-round score of 3-over 58 and fellow senior Zach Ginsburg's 4-over 59.