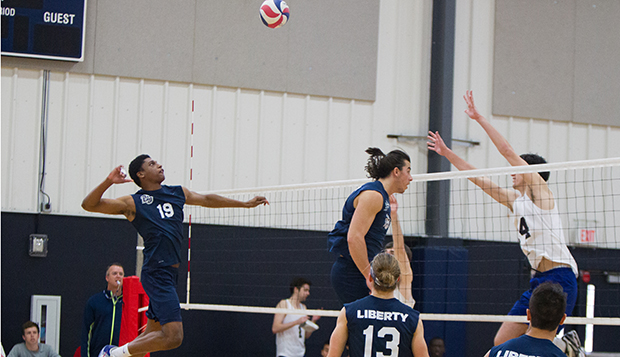 Both of Liberty University's men's volleyball teams were knocked out in the first round of Saturday's Silver bracket playoffs at the National Collegiate Volleyball Federation (NCVF) Championships in Kansas City, Mo.

The Flames DI team's postseason run came to a sudden end with a 22-25, 25-21, 15-11 setback against Utah Valley in the opener of the Silver Consolation bracket. Liberty, which entered the 48-team tournament seeded 16th coming off its second-place showing at the East Coast Championships, finished 3-5 at nationals.

Air Force, which eliminated Virginia Tech in the semifinals, wound up defeating Utah Valley in the Silver Consolation final, 25-23, 19-25, 15-13. Three of the teams that defeated Liberty in pool play and crossover matches went on to finish in the top five of the Gold bracket. Marquette placed third, and Indiana and Illinois tied for fifth.

"Seven of the top eight teams were from the Midwest," Liberty Head Coach Bryan Rigg said, noting that Penn State and Pittsburgh were the only two East Coast teams (down from five last year) to advance to the Gold bracket, where they tied for ninth. "We knew from playing in the Hoosier-Illini Classic that the Midwest region would be the strongest in the country this year."

After opening Friday's action in the National Collegiate Volleyball Federation (NCVF) National Championships in Kansas City, Mo., with a 25-19, 25-22 win over ECVA Atlantic Central Tournament champion JMU, Liberty University's Division I men's volleyball team was swept in crossover matches the rest of the day to fall into the Silver Consolation bracket for Saturday's playoffs.

With a win, Liberty would face the winner of another quarterfinal match between California-Berkeley and California State-Sacramento in the semis at 3:15 p.m. with the final scheduled for 5:45 p.m.