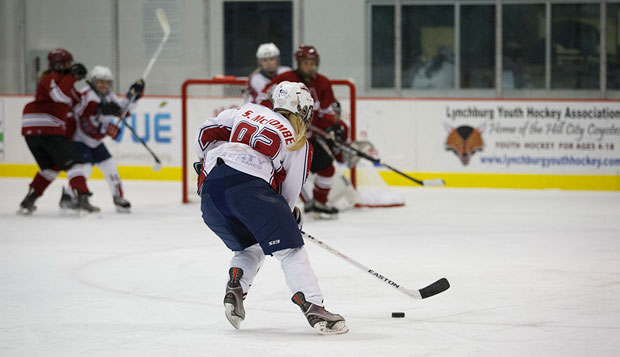 After falling behind by three goals in nearly two full periods of play at home Friday night, the Lady Flames Division I hockey team mounted a stellar comeback, led by Stacey McCombe, to defeat the University of Massachusetts 5-4.

Liberty got off to a slow start at the LaHaye Ice Center, and UMass capitalized, picking up two goals in the first period.

The Lady Flames were unable to slim the margin as the second period progressed, and with 7:15 left in the frame, UMass chipped in a third goal to take a seemingly insurmountable 3-0 lead.

McCombe didn't get that message, however, and resiliently powered through the defense to put Liberty on the board four minutes later. Carly Peleshok picked up the assist. Amanda Grainger followed closely behind with a goal of her own off an assist from Carrie Jickling and Jenny MacArthur.

The Lady Flames took to the locker room still behind at 3-2 but with the momentum in their favor.

Liberty got right to business in the third period with McCombe picking up the tying goal on a power play four minutes in, assisted by Grainger and Sarah Stevenson.

With just under seven minutes remaining in the period, McCombe picked up a hat trick, and gave Liberty its first lead of the night. The Minutewomen responded just seconds later, making good on a Liberty turnover in front of the net, locking the score up at four a piece.

The Lady Flames went up for good on the scoreboard with just under two minutes to go in the game as Laura Del Monte put in the go-ahead goal off an assist from Jickling.

"I was very impressed that the girls kept their heads in it even being down three and battled back," said Lady Flames Head Coach Paul Bloomfield. "Amazing example of laying it on the line."