Castro to be inducted into National Wrestling Hall of Fame 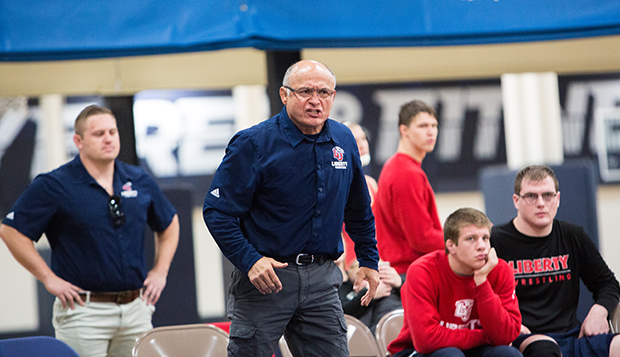 Already a member of Liberty University's Athletics Hall of Fame — as both a former student-athlete and NCAA Division I head coach — Flames Club Sports Wrestling Head Coach Jesse Castro will be inducted into the Virginia Chapter of the National Wrestling Hall of Fame on April 22, when he will receive a Lifetime Service to Wrestling Award at a banquet near Richmond, Va.

Castro — who began his wrestling career with the Flames in 1976, three years after Bob Bonheim started the program, and was a four-time NCCAA national champion — is being recognized for his years of dedication to the development of leadership and citizenship in youth through the sport. He was nominated for the award by Liberty Christian Academy wrestling coach Paul Anthony, one of 16 Virginia chapter board members.

"He was pretty much unanimously approved," said Anthony, who received the same award in 2014. "It's a big deal and he's very deserving. He has close to 40 years in wrestling and he's been very successful, too, both as an athlete and a coach. He did a great job of resurrecting the program. It's a daunting task starting and running a Division I program in any sport. I'm proud of him for keeping it at a high level as it transitioned to the club level. It is still a very well respected program and it gives kids an opportunity to continue their wrestling careers in college."

Anthony formerly coached the Flames with Castro from 2006-08, the two seasons after Castro was commissioned by Jerry Falwell Sr. to revive Liberty's wrestling program at the NCAA Division I level.

Castro has recruited a number of Anthony's LCA graduates to wrestle at Liberty, including seniors Ike Podell and Charles Hancock who helped the Flames to a runner-up team finish at the NCWA Grand National Championships in March.

Castro will be inducted at Wyndham Virginia Crossings Hotel in Glen Allen, Va., with a reception at 4:30 p.m. and dinner at 6 p.m. followed by the ceremony, expected to be attended by 250 people. His Lifetime Service plaque will be on display at the Virginia chapter location in Richmond and the National Wrestling Hall of Fame in Oklahoma City.