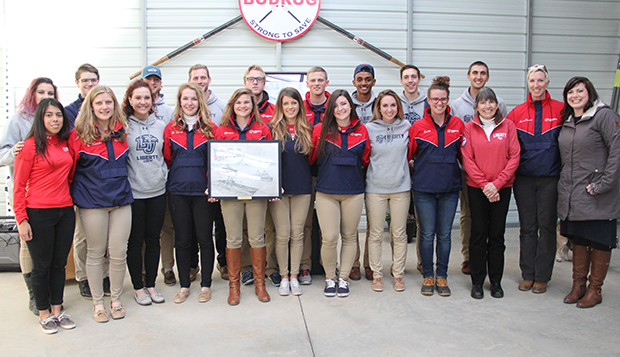 Liberty University's crew team formally dedicated its new boathouse, named in memory of U.S. Navy Cmdr. Martin Bodrog who was killed in a Sept. 16, 2013 shooting at the Navy Yard in Washington, D.C., at a ceremony this past Friday attended by Bodrog's family, including his daughter, Isabel ('13).

The boathouse was built over the summer near Mitchell's Point Marina on Smith Mountain Lake and completed before the team returned for the fall semester.

"(Bodrog) was very good friends with my husband, Jeff," Liberty Head Coach Debbie Prowse said. "They worked together at the Pentagon. He was a family man, a wonderful leader, a Christian man, and we just wanted to name it after somebody who you would aspire to be."

"It was awesome," Debbie Prowse said. "We had the best time."

The next morning, Liberty loaded up seven skulls from the new boathouse into its trailer and traveled to Claytor Lake State Park in nearby Dublin, Va., for the Clayton W. Waterfield Memorial Cup Regatta, also known as the Virginia Invitational, where it competed against crews from Virginia Commonwealth (VCU), Virginia Tech, Mary Washington, Christopher Newport (CNU), James Madison (JMU), and Xavier (Ohio).

Virginia Tech hosted the event and VCU, which entered more than 10 boats, was the overall winner with 41 points. Liberty scored 21 points to place third behind the runner-up Hokies (24).

Rowers battled a bit of a headwind in the morning which switched to a tailwind in the afternoon.

"You have to be prepared for that and deal with the different wind conditions," Prowse said. "Overall the team did really well. I was really pleased with their performances."

Other than its women's pair of junior Lydia Miller and sophomore Baillie Knecht, which placed third in the 2,000-meter event in 9 minutes, 35.5 seconds, behind two Virginia Tech tandems, Liberty's boats all finished first or second in their respective races.

The Lady Flames' Women's Varsity 4 coxed by Miller and rowed by Catto, junior Allie Coughlan, sophomore Daisy Wedge, and Knecht, clocked a time of 8:51.6 to finish runner-up to VCU (8:45.0), beating boats from JMU and CNU.

The Flames' Men's Novice 4, coxed by senior Cindy Zambrano and rowed by Jensen, sophomore Amanwii Kasy, junior Carson Faix, and sophomore Noah Palm in the bow seat finished runner-up to VCU's A boat (7:27.4) in 7:46.1, edging out VCU's B boat.

This weekend, Liberty will send five boats — its Women's Varsity 8, Men's Varsity 4, Men's Novice 4, and a Men's Double and Men's Single — to Oak Ridge, Tenn., to compete in the SIRA National Championships, open to NCAA as well as club programs.