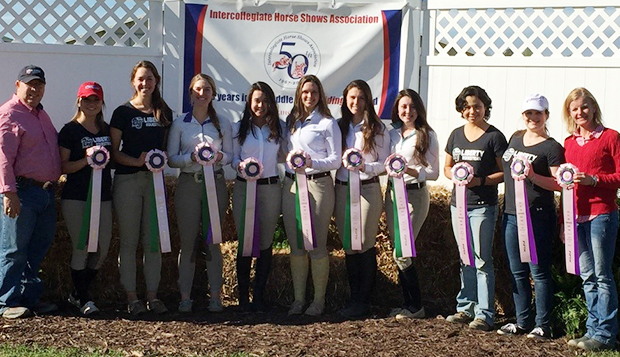 In a tight competition for the two teams to qualify for the May 4-7 IHSA National Championships at the Kentucky Horse Park in Lexington, Ky., Emory & Henry (38 points) edged out two-time defending champion Goucher College (37) for the team title. The Lady Flames collected 28 points to finish behind Randolph College (34) and East Carolina University (29), which had a bit of a home-ring advantage after riding in half of its regular-season shows at St. Lawrence.

Liberty senior captain Elizabeth Chenelle placed fourth in Open Flat to start the team competition before sophomore Kendall Burdette followed with a fifth-place showing in Intermediate Flat. Chenelle was unable to complete the course in Open Fences, eliminating her from point contention.

Individually, Chenelle and sophomore Morgan Faber, who placed 10th in Novice Fences and sixth in Novice Flat, did not qualify for nationals as only the first- and second-place riders advanced.

Chenelle will, however, be Liberty's first representative at IHSA National Championships, competing in the Cacchione Cup competition as the Region 4 regular-season high-point open rider.