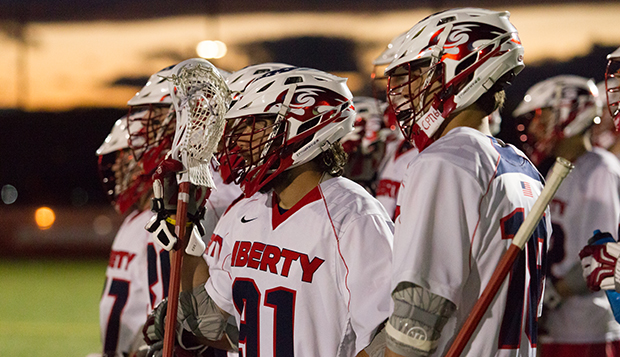 The Flames (5-5), coming off a weekend when they upset seventh-ranked Florida State on Friday night before falling to No. 17 Connecticut on Sunday, will look to start a new home field winning streak after having their 26-game run of success snapped. They moved up four spots in this week's MCLA Division I Coaches Poll, nonetheless, as all five of their losses have come against ranked opponents.

With this being College For A Weekend (CFAW), a sizeable crowd is expected for the late-night-approved event for the fifth year in a row, with last year's contest against Florida drawing more than 5,000 fans. The Flames have won the past four midnight matchups and will be favored to keep that streak alive, with Davenport (6-4) not currently in the top 25. The Panthers have won four in a row after losing four straight, starting with a 9-7 setback to then top-ranked Georgia Tech. They feature junior two-time All-America attack Bryan LaRocque, who leads MCLA Division I in goals with 39.

Liberty, paced by freshman attack Caleb Britton (who ranks second with 38 goals and sixth overall with 51 points) won the last matchup between the two teams on Feb. 22, 2015 at home, 13-9.

This is the Flames' final home game of the year before they conclude regular-season play next Saturday at SouthEastern Lacrosse Conference (SELC) Northwest Region rival Virginia Tech at 7 p.m. in Blacksburg, Va., with the winner of that contest receiving the top seed out of the region going into the April 21-23 SELC Tournament near Atlanta.