Equestrian Hunter Seat team one hurdle away from nationals 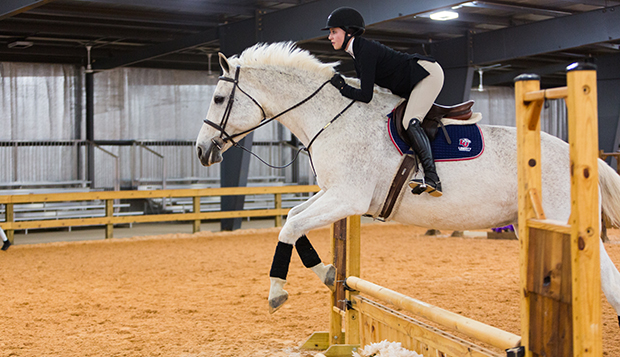 In the sport of equestrian, there is a symbiotic relationship between rider and horse that is almost spiritual in nature.

"Horses are created by God just as we are," said Kendall Burdette, a sophomore on Liberty University's Hunter Seat equestrian team. Burdette was the High Medal award winner at the Tournament of Champions, a prestigious, four-show national-level event. "Horses have feelings as well. They have bad days, they have off days, they have great days. You have to be adaptable. It's all about how can we maximize the effort from these horses through the relationships that we establish with them. Absolutely, trust is the number one thing."

The spiritual bonds formed this season between Liberty's team members as well as with their coaches and trainers are even stronger than those the riders share with the horses.

"I feel like we're a family and that's not something you can get with every team," Burdette said. "We don't have drama. It's truly a Christ-centered team and our coaches have supported us in our personal lives outside of the barn as well as here, and they've really made sure that we achieve our personal goals as well as our team goals."

Burdette will be one of seven Liberty riders traveling to St. Andrew's University in Laurinburg, N.C., for this Saturday's and Sunday's Intercollegiate Horse Show Association (IHSA) Zone 4 Championships. She and the Lady Flames will try to develop a level of trust with the horses they are paired with and establish themselves as legitimate contenders in perhaps the most talented zone in the nation.

If Liberty can place in the top two out of the five schools, it will advance for the first time as a team to the May 4-7 IHSA National Championships at the Kentucky Horse Park in Lexington, Ky.

"It's hard to get through this zone, yet we've shown at the tournaments that we can compete with these teams," Liberty Equestrian Center Executive Director Jim Arrigon said.

"We're already rejoicing from the season that we've had, so going to Zone finals is a bonus," Burdette said. "I think everyone's really in a good mental and physical place and I have full confidence in my team, I really do. If everyone goes in and rides their best, we can be very competitive."

Senior captain Elizabeth Chenelle has already qualified for nationals as the Region 4 high-point open rider, and will be the first Liberty representative in Lexington as one of 41 Cacchione Cup finalists. She would like to match Assistant Coach Kimberly Counts' 10th-place showing in last year's Cacchione Cup, when Counts was the Region 4 representative as a senior at Mary Washington.

"I'm really excited to go," Chenelle said. "It's a huge class and I would love to be in contention for a ribbon out of 40 other top riders. It'll be a series of different events, starting with over-fences, with the top 25 making it back to compete on the flat."

She missed all of her junior season with a compression fracture in the T-12 and L-1 vertebrae in her back after being thrown off a horse in practice.

"Liz was the captain when I started here and she was the best captain I could have had," Arrigon said. "She went to all of the shows last year and kind of helped coach and helped teach, though she couldn't ride."

"It was definitely an ideal season and my team is amazing," said Chenelle, who led the Lady Flames to the regular-season title in their first season in Region 4.

Competing in open fences, she is hoping to perform at her best this weekend, when she and sophomore Morgan Faber (novice flat and fences) will ride as individuals as well as being joined by Burdette, freshman Amber Gayheart, junior Zoe Leppke, freshman Katelyn Tyler, and junior Anna Davidson in the team competition.