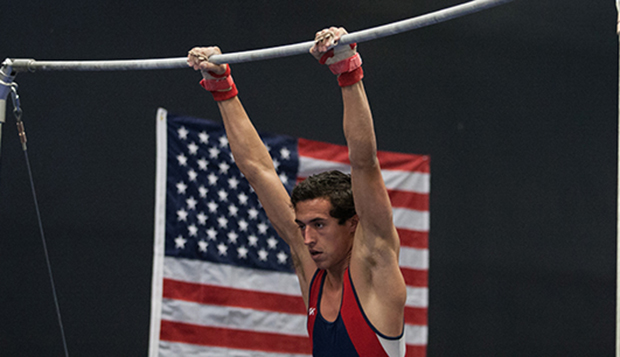 Liberty junior Austin Minuto will represent the Flames' men's team as individuals in the Collegiate All-Around competition along with junior Cameron Streeter. (Photo by Jessie Rogers)

After taking a year off from competing at the National Association of Intercollegiate Gymnastics Clubs (NAIGC) Championships, Liberty University's women's and men's gymnastics teams are vaulting back onto the national stage for this weekend's championships at the Columbus (Ohio) Convention Center.

Second-year Head Coach Tim Kappel and a team of seven women and two men gymnasts flew out of Roanoke this afternoon. He is confident they can contend for team and individual titles in various events, starting in Thursday's preliminary rounds.

Seniors Ashley Grim and Jessie Hogue and sophomores Julie Bouton and McKella Johnson will be representing the Lady Flames in the All-Around in the Collegiate (Level 9) division while sophomore Leah Corpora will compete on the balance beam and floor exercise.

"If our girls Collegiate-level team goes out and is firing on all cylinders and things go well, we could go out on top (as national champions)," Kappel said. "If we make finals I'd be happy, if we make a run at winning the whole thing, I'd be very happy."

The Lady Flames were placed in the third of five sessions of 12 or more teams along with California-Berkeley, UCLA, Iowa, UNC-Chapel Hill, JMU, New Haven, Ohio's A and B teams, Penn State, Rhode Island, Rutgers, Salisbury, and Utah State.

They can qualify for Saturday's six-team finals by either winning their session or being one of the top six overall scoring teams after preliminaries. Individually, the top 16 athletes qualify in each event, including the All-Around, which encompasses four events (balance beam, floor exercise, uneven bars, and vault) for women and six (floor exercise, high bar, parallel bars, pommel horse, rings, and vault) for men.

"We have three girls that could potentially advance to Saturday's finals in the All-Around and others in several individual events," Kappel said, noting the women's team is strongest on the vault, balance beam, and floor and not as deep on the uneven bars. "If they go out and hit and do what they're capable of doing they should (advance).

"They'll have to stick their landings and keep their routines clean and reduce mistakes (because) there will be very little room for error in the finals," he added.

Teams to contend with include the University of California-Davis and a few other schools from out West as well as JMU and North Carolina from the Mid-Atlantic region.

In the men's events, juniors Cameron Streeter and Austin Minuto will both enter the All-Around competitions in the Collegiate division, where they will have to turn in their highest performances of the season to reach the finals.

The Lady Flames will have two gymnasts (senior Sara Escobar on the beam and floor and junior Davina Bowman on the beam) competing at Level 8, which is where JMU is the two-time defending national champion. 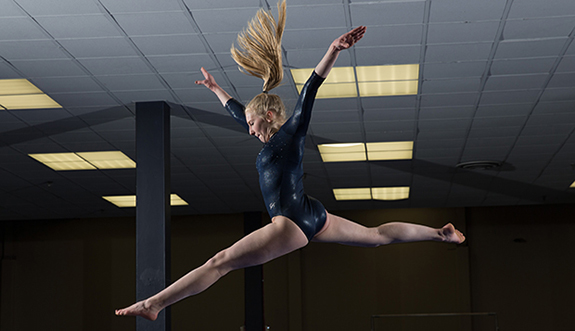 Sophomore Julie Bouton is one of four Lady Flames competing for the Collegiate All-Around title. (Photo by Kevin Manguiob)