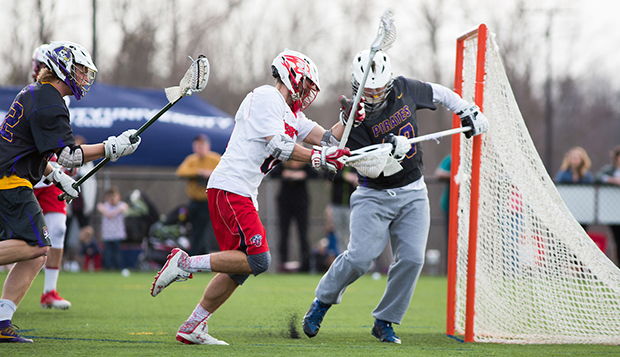 He shares how a friend introduced him to the sport and why he decided to continue playing it at Liberty.

"I was getting tired of baseball, not enough movement for me, so I tried out lacrosse first year and loved it," Lombardozzi said. "Ever since then, I've just been in love with the sport. I chose Liberty University to play lacrosse because, honestly, I'm not a big fan of lacrosse players anywhere else. I knew that Liberty was going to be a standard-setter. That's one of the goals this year, for the team, to change the definition of a lacrosse player on Liberty's campus and hopefully throughout the whole United States eventually. As of right now, we just try to represent God on and off the field."

He uses lacrosse as a platform to share his faith, even during breaks in the action on the field.

"The sport of lacrosse allows us to preach about Jesus," Lombardozzi said. "On the field, you're very close to other players. I play attack so whenever the ball's on the defensive end, I'm always up there chatting with the defenders. It gives me a lot of time. Usually, they're trying to nitpick us and bring us down about our faith, but that just makes it all the better whenever you can turn it around and turn it into something good and preach the Lord, in whom we trust."

The Flames will return to the Liberty Lacrosse Fields to wrap up their home schedule on Friday at 11:59 p.m. for the fourth-annual "Midnight Mayhem" matchup, against Davenport, before traveling to SouthEastern Lacrosse Conference foe Virginia Tech next Saturday for their regular-season finale, which will determine the top seed for the SELC Tournament.