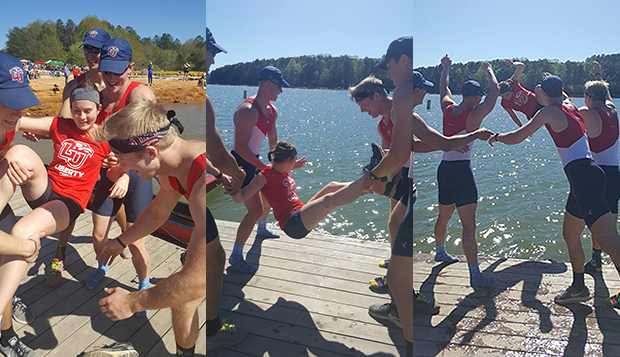 Members of Liberty's Men's Varsity 4 pick up and throw coxswain Chandler Pearson into the water after winning Saturday's race.

"It was beautiful weather, perfect for racing with barely any wind," Liberty Head Coach Debbie Prowse said. "We could get accurate times on how our speed was without the wind variable."

Senior Chandler Pearson served as coxswain for that boat with sophomore Spencer Barrett rowing in the stroke seat, senior Josh Elliott in the three seat, freshman Ryan Krupansky in the two seat, and freshman Gabe Shemeth in the bow.

The Lady Flames Women's Varsity 4 placed third in its heat, missing the finals cut by five seconds in 8:44.93, behind Clemson (8:25.60) and Tennessee (8:39.40). Sophomore Savannah Perry was the coxswain followed by junior Sarah Catto in stroke seat, junior Lydia Miller in three, sophomore Daisy Wedge in two, and sophomore Bailee Knecht in the bow.

Perry, Miller, Wedge, and Knecht were joined by junior Allie Coughlan, senior Gabby Kitchens, senior Savannah McGuirt, sophomore Emma Spector, and junior Sarah Catto on the Women's Varsity 8, which finished fourth out of six boats in the final in 7:46.79, behind Clemson (7:09.00), Georgia's A (7:12.83), and Tennessee (7:43.52).

This Friday at 5 p.m., Liberty's crew team will dedicate its new boat house located adjacent to Mitchell's Point Marina on Smith Mountain Lake in honor of former U.S. Navy Cmdr. Marty Bodrog. The father of 2013 Liberty graduate Isabel Bodrog was killed during a mass shooting at the Navy Yard in Washington, D.C., on Sept. 16, 2013. The ceremony will feature a bagpipe performance of "Amazing Grace" and singing of "Eternal Father," a traditional Navy hymn.

Then on Saturday, Liberty will travel to Claytor Lake in Dublin, Va., for the Clayton W. Waterfield Memorial Cup Regatta, a point trophy race also known as the Virginia Invitational, where teams earn four points for first-place finishes, three for second, two for third, and one for fourth toward final team standings.

Liberty will enter a Women's Varsity 8, a Women's Varsity 4, two Men's Varsity 4s, a Men's Novice 4, a Men's Pair, and a Mixed 8 with four women and four men rowers. The Flames and Lady Flames will compete against in-state crews from Christopher Newport, James Madison, Mary Washington, Virginia Tech, and VCU as well as Xavier from Ohio.

That will be Liberty's final tune-up for the April 14-15 SIRA Championships in Oak Ridge, Tenn. Liberty will then travel to Rocketts Landing in Richmond, Va., before competing in the ACRA Henley Style Regatta, an inaugural event that will feature head-to-head dual races on May 13-14 in Nashville, Tenn., helping to bridge the gap between the SIRA and ACRA National Championships, hosted by Vanderbilt University on May 14-15.