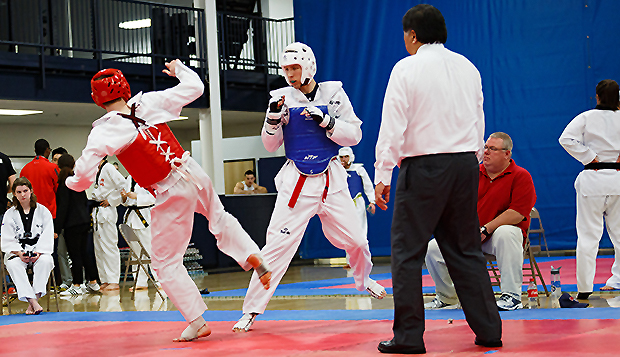 Sophomore red belt Thomas Siff, shown competing in an ACAT Tournament hosted by Liberty on Feb. 25, was one of the Flames' three gold medalists. (Photos by Caroline Cummings)

Seven of Liberty's eight medalists fought in the color belt divisions, with sophomore red belt Thomas Siff and freshman yellow belt Wesley Angerville both going undefeated in five matches to claim gold medals. Of the Flames' six black belt contenders, all but one reached the quarterfinals, but only heavyweight Jonathan Healy — a junior from Houston pursuing a business degree through Liberty's online programs — earned a medal, his second gold in three seasons.

Healy qualified to represent Liberty and Team USA at his second World University Summer Games, set for Aug. 19-30 in Taipei, Taiwan. In 2015, he was one of the Flames' five medalists at nationals.

"There were other ranked heavyweights there that really pushed him, but he didn't lose a round in the double-elimination tournament," Liberty Head Coach Tom Childress said. "It's phenomenal what a talent he has become and it's fun to watch him fight. He's coming into his own and reaching the next level."

Since it was a World University Games qualifying year, there were multiple nationally ranked fighters in every black belt division.

"All of our black belts did well," Childress said, noting that the only one to lose in the first round, freshman middleweight Clint Stinchcomb, lost to an eventual silver medalist. "Considering the number of athletes we had advance to the quarterfinals and how hard they fought, they showed a lot of resilience and strength. It was a great experience and they were definitely successful in the way they competed. The showed a lot of heart and a lot of character."

More than 400 male and nearly 400 female competitors traveled to the 42nd annual tournament, hosted by the University of California-San Diego at RIMAC Arena in La Jolla, Calif., making it one of the largest to date, with teams such as UC-Davis, UC-Berkeley, Duke, Brown, Rutgers, and West Point entering 40 or more athletes.

"The East Coast was represented there in force," Childress said, noting that West Point, the defending novice color belt team champion, finished runner-up to UC-Davis, which had more than 50 competitors.

Lady Flames junior Tykeyah Henderson took the silver medal in the red belt middleweight division after winning a yellow belt national title as a freshman and sustaining an injury at nationals as a sophomore. She dropped an 11-9 decision in the final to the champion from Michigan who eliminated sophomore teammate Tyler Creese and freshman Brittany Harris, the eventual bronze medalist, in previous rounds.

"Tykeyah gave her a great fight," Childress said. "It was a really close match that went down to the wire."