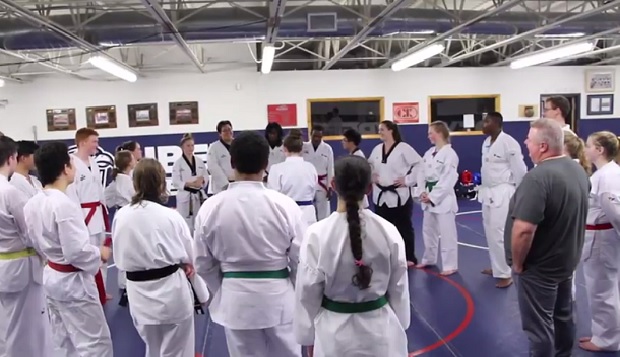 Childress, discusses the development of the program since he inherited it from founding coach Jesse Wilson, a fellow police officer.

"It's a process, but we really have seen great growth," Childress said. "This year, we're up to 26 team members and that's the largest team we've had so far. We're beginning to have people stay with the team year after year after year, which really helps with the growth and development because … it really is a technical sport and it takes a lot of time to develop those technical skills."

Childress, who has served as defensive tactics instructor at the Central Virginia Criminal Justice Training Academy, also talks about the first-hand experiences that led him and Wilson the self-defense classes he and his team conduct at the start of each semester, geared primarily toward female students.

"If I had my absolute control over it, self-defense would be a required element in schools starting from sixth grade on," he said. "The more you know, the better your chances of getting away from an attack."

He said the sport of tae kwon do develops character and faith within each individual on the team.

"The very essence of martial arts is the development of body, spirit, and mind, and as a Christian, your spirit essence is Jesus Christ," Childress said.  "Of course, being Liberty, we don't have to hide that or be ashamed of it. As a matter of fact, it's the cornerstone of what we are."