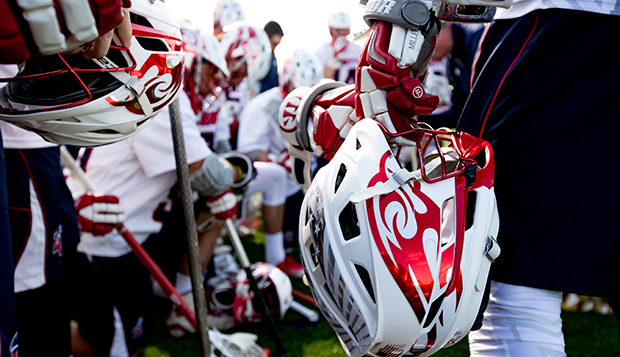 The Flames lost at the Liberty Lacrosse Fields for the first time since a 15-13 setback to the University of Richmond on April 10, 2012, back when they competed at the Division II level.

A physical brand of defense combined with excellent goalkeeping by freshman Ryan Reynolds kept Liberty University's men's lacrosse team in Sunday afternoon's game against 17th-ranked Connecticut, played under sunny skies at the Liberty Lacrosse Fields. But the Flames' offense was unable to generate enough fire of its own — off the fast-break or out of the set offense — and their 26-game home winning streak came to an abrupt end with a 9-6 setback.

"I do not have any way to sugarcoat it right now," Flames Head Coach Kyle McQuillan said. "The guys just didn't come ready to play. I think we were satisfied with what we did on Friday night and we decided to hang our hats on that and didn't come ready for today's game. We struggled to put four quarters together. We got up 2-0 on them, so we had the momentum. We just gave it away."

Fresh off the euphoria of Friday night's upset of seventh-ranked Florida State, the 25th-ranked Flames (5-5) sprung out to a 2-0 lead with back-to-back goals in a span of 22 seconds early in the first quarter.

The Huskies (3-2) won the ensuing faceoff, but the Flames' defense stole the ball back and Britton cleared it upfield before sending an outlet pass to Gregory, who set up senior attack Nick Lombardozzi (1 goal) for a point-blank bounce shot through traffic in the left crease at the 13:52 mark.

After Blake Feagles scored the first of his two first-half goals to get the Huskies on the scoreboard, Reynolds made a save and sent an outlet pass to freshman defender Lukas Tophoven, who set up Liberty's perimeter attack. Freshman midfielders Erik Arvesen, Carter Elliott, and Derrick Esh worked the ball around to Lombardozzi, whose pass through the middle bounced past his intended target to Britton for another turnaround shot into the upper netting for a 3-1 edge.

Reynolds made two sensational saves of low shots by Connecticut leading scorer Brett LeClair, sacrificing his body to smother the submarine missiles before Feagles sneaked a bounce shot past him from the left side at the 11:31 mark of the second quarter.

"Ryan in cage played phenomenal for us," McQuillan said of Reynolds, who made nine saves and picked up two ground balls. "Unfortunately, the scoreboard is not going to show that and not winning is a tough pill to swallow, but he played fantastic. He gave up nine goals, but he just got hung out to dry in a few of those situations."

Britton responded a minute later by completing his hat trick off assists from Gregory and Elliott for a 4-2 advantage before UConn attack Cam Criniti capitalized on a miscue deep in the Flames' defensive end to draw his team within 4-3 before the half.

The Huskies, who lost another defensive-oriented contest to FSU on Saturday, 8-7, tied the Flames less than a minute and a half into the third quarter when Criniti shoveled in a shot off a fast-break feed from midfielder Matt Crowe. Crowe gave UConn its first lead at 5-4 by capitalizing on a man-up situation with a wicked ground ball shot past Reynolds.

Liberty converted on a man advantage to level the score at 5-5 when Elliott struck quickly top shelf off an assist from Britton with 2:10 left in the quarter. However, the Huskies reclaimed a lead lead they would not relinquish in the final 0.5 seconds of the third quarter on a spectacular play set up by a nearly full-field baseball outlet pass from Duarte to Criniti. He caught the Hail Mary-type assist just beyond the Flames' defense and quickly turned toward the cage and put his buzzer-beating shot into the upper netting past Reynolds for a 6-5 advantage.

After UConn extended its lead to 7-5 on a scoop shot by Richard Rorick assisted by Quincy Pecora, the Flames had a golden opportunity to get back in the game when the Huskies were called for one- and two-minute penalties simultaneously.

Britton capitalized on a Gregory assist less than 20 seconds into the extra-man situation, but Liberty turned the ball over and was called for two penalties of its own, leading to UConn's final two goals.

The Flames did hit a few posts with shots and Duarte made a number of spectacular saves of his own, but their attack lacked its usual firepower, especially playing on its home turf.

"We just kept waiting for the offense to catch fire and unfortunately, it just never happened," McQuillan said. "Guys never got the rhythm that they needed to be able to get things started. The defense made some mental mistakes, but did enough for us to win. I think offense, honestly, didn't get the job done. Too many missed opportunities, too many turnovers, not connecting on their shots. It was a tough day on the offensive side of the ball. We just made too many mistakes and weren't able to capitalize on opportunities."

Junior faceoff specialist Jacob Campbell won eight of 16 faceoffs, but not many of them were decisive enough to put the Flames on attack from the restart.

"I can't remember a time where we won the faceoff outright," McQuillan said.

Liberty must regroup in practices this week to prepare for another physical battle with Davenport in its annual "Midnight Mayhem" matchup on Friday before traveling to Virginia Tech the following Saturday for the regular-season-ending showdown that will determine the Northwest Region champion and top seed going into the SELC Tournament.

"I still have a lot of faith in these guys," McQuillan said. "I still know we are talented enough to win an SELC Championship and go to nationals, but we've got to eliminate games like this. I told the guys after the game that if this isn't motivation to come back to practice next week and work harder than we ever have, (it should be) because obviously we've shown we can't be consistent from week-in to week-out."