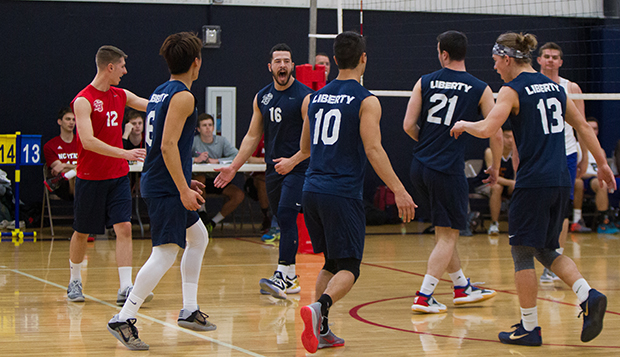 Liberty's DI men's volleyball team upset Penn State in the first round of pool play, but couldn't handle it in the championship rematch. (Photo by Jessie Rogers)

Liberty University's Division I men's volleyball team matched its best showing ever at Saturday's East Coast Championships, hosted by the University of Maryland, finishing runner-up to Penn State, the No. 8-ranked team in the National Collegiate Volleyball Federation (NCVF) Division I poll, in the 24-team tournament.

"Everybody played well, better than they have been," Flames Head Coach Bryan Rigg said, noting that Liberty placed higher than five teams ranked above it — Central Florida, Florida, Maryland, Pittsburgh, and Virginia Tech. "As a team, we were getting our serves in, which was great, and our serve-receive passing was where it was a month ago. It was terrific, and that fueled the offense. We've been in a little bit of a slump for the past month and a half, but after today, it feels like we're back on track."

The Flames, ranked 30th, swept the three teams in its pool and went 4-1 for the day. Liberty's Division II team, ranked 24th, also lost to the Nittany Lions, 25-19, 25-15, in the semifinals of its playoffs, and finished third. Both teams should move up significantly when the final rankings are released prior to the April 13-15 NCVF National Championships in Kansas City, Mo.

"Starting about two weeks ago, we let Gene play all-around in our rotation and his serve-receive passing was excellent, as was his hitting out of the back row," Rigg said. "It has kept him engaged in the offense and gives us the ability to run plays to him and change the trajectory of the attack."

Junior opposite hitter Scott Zalizniak and sophomore middle hitter Brady Quakenbush also played well and the Flames' front line as a whole put up a much better block at the net.

"One thing we did today which we haven't been doing is we got a lot of blocks," Rigg said. "We averaged about three per set after averaging about one per set in the past. Guys started to close holes against harder-hitting teams. They brought the effort and the energy. They were ready to play."

"He was on with his serves, aggressive on defense, and he was scrappy, getting a lot of difficult digs," Rigg said of Hong. "Teams couldn't put the ball away because he could read the ball so well."

For Liberty's DII squad, freshman outside hitter Sam Hess, who was named Tournament MVP after leading the Flames to the ECVA South Division II title last weekend at JMU, was honored on the All-East Coast tournament team. He carried the team with his passing and offense, complemented by freshman Daniel Koloff. Liberty defeated Ithaca and Delaware and lost to Maryland in its pool before defeating JMU in the quarterfinals and being eliminated by PSU in the semis.

Both teams will be vying to make the 16-team gold bracket at the 48-team national championships, though they will be underdogs against some powerful teams from the Midwest and California.