Flames extend home winning streak with upset of No. 7 FSU 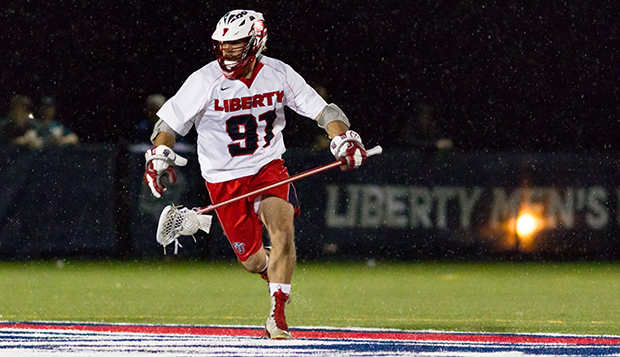 "Florida State always gives us a great game and home-field advantage definitely helped, but I don't think it's too much to say this is the biggest win in program history," Flames Head Coach Kyle McQuillan said, noting his young team was coming off losses at No. 5 Colorado and No. 10 Colorado State last weekend. "We've never beaten a top-10 team before. Hopefully, it will help inspire these guys and they'll recognize how good they are, especially after that Colorado trip. This was that mountaintop that I felt like we kind of reached in Colorado and now we're starting to come over the other side of it."

Senior attack Nick Lombardozzi started the scoring for the Flames (5-4) with a finish from the right side at the 10:38 mark of the first quarter before freshman attack Caleb Britton, the Flames' leading scorer on the season, netted the first of his five first-half goals. He received a fast-break feed from sophomore attack Sam Gregory and put a point-blank shot past FSU goalie Anthony Cicio for a 2-0 advantage.

The Seminoles (10-2), whose only previous loss came against top-ranked SELC rival Georgia Tech, tied the game at 2-2 with 12:12 left in the second period on a shot from the left side by Carter Torgerson. A minute later, Britton lifted Liberty back into the lead to stay when he picked up a ball that Cicio let go on the ground while contesting that Gregory had cut into the circle, and fired it into the open cage.

"Our guys minimized their mistakes and the biggest thing I saw today that was the difference-maker is we capitalized on Florida State's mistakes," McQuillan said. "They're going to happen and we've got to be ready for them and fortunately tonight, we were able to do that."

Britton scored his third goal with a man advantage after taking a pass from Lombardozzi from behind the right side of the cage, finishing with a shot from the left side into the top left corner for a 4-2 lead.

Flames freshman goalie Ryan Reynolds then made a quick-reaction save of a point-blank, fast-break shot from the right side, preserving the two-goal advantage.

"Ryan had a fantastic game," McQuillan said. "It was great to see that, especially from a goaltending position, to be able to come in this late in the season and get a start against our highest-ranked opponent we've played so far at home and to be able to have such a great game. He was well over 50 percent (in saves) and a big part of our transition game as well."

Gregory used a stop-and-go run from the left side to find room to thread a perfectly placed pass to freshman midfielder Derrick Esh for a turnaround shot from the right crease that extended the Flames' lead to 5-2 lead with 4:05 left in the half.

"We really worked well as a team," Britton said. "(Gregory and Lombardozzi) had some really good dodges. I was just able to move off ball and find holes in the defense and they were able to get it to me."

Reynolds started a Flames fast break with a save and an outlet pass to Lombardozzi who found Esh who set up Britton for his fourth score, a turnaround shot from close range 2:53 before halftime. Britton then capped the first-half scoring with just 2.3 seconds left before the break, finishing a feed from Gregory set up by freshman midfielder Carter Elliott's clear.

"We got up on them and didn't stop," Britton said. "It was good for us, especially coming out of Colorado. It showed we could play with these top-10 teams. That really built our confidence up and with this win, it's going to go even higher."

FSU netted the first two goals of the second half, by Torgerson and Davis Goodman, who benefited from a two-man advantage, before Lombardozzi finished a fast break set up by freshman defenseman Grayson Rhyne and senior midfielder Brett Wood, firing a laser from the right side into the upper netting for an 8-4 advantage.

After Noah Dearman got one goal back with a bouncing shot taken under double coverage, the Flames ended the third quarter with a sidearm shot from the top of the box by Elliott, who started the fourth-quarter scoring with a shot off an assist from Lombardozzi with 7:14 remaining in regulation.

Elliott showcased his speed with a fast-break clear before setting up Gregory on the left side for a shot that ripped into the top netting to cap Liberty's scoring.

"We were getting some good looks in transition," McQuillan said. "The guys were definitely moving the ball well and there was a lot of speed out there, up and down the field. It felt like this was our first game of the season with the way some of these guys were running around. Definitely, transition helped us get the lead and keep that separation."

McQuillan gave sophomore Eric Masters his first start at defensive middie and he excelled in that position to help anchor the defense.

The Flames will continue their three-game homestand on Sunday at 3 p.m. with a first-ever meeting with No. 17 Connecticut, which will first face the Seminoles on Saturday at Liberty. Sunday's contest will be streamed live by LFSN through the Big South Network.

"We've just got to use the momentum that we have right now and carry it through this weekend and through the rest of the season," Britton said. "We've got UConn on Sunday, Davenport for (next Friday's) Midnight (Mayhem) game, and Virginia Tech, always a big rival (on April 15 in Blacksburg, Va.). That will be a really good game to end the season before the (SELC) playoffs." 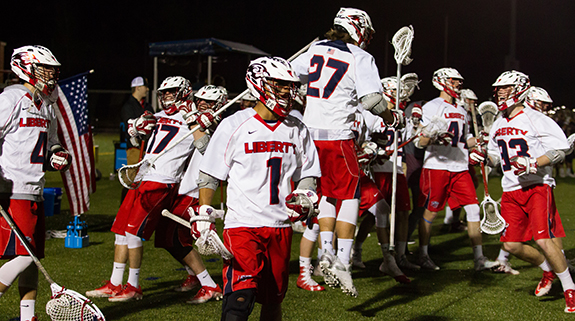