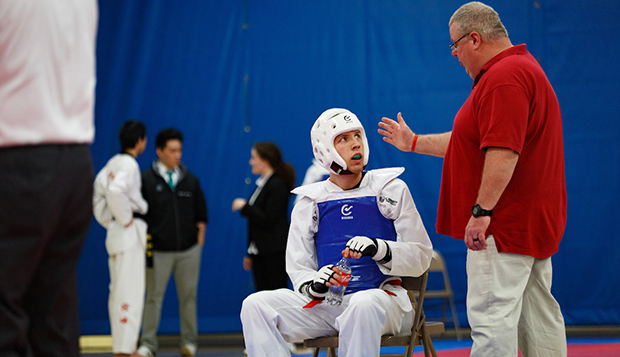 Fourteen members of Liberty University's tae kwon do team will drive north tonight to catch a 6 a.m. flight out of Baltimore-Washington International (BWI) Airport on Thursday to San Diego, site of this weekend's National Collegiate Taekwondo Association (NCTA) Championships hosted by the University of California-San Diego.

There, they will be joined by junior black belt Jonathan Healy, a 2015 national champion for the Flames pursuing his degree through Liberty's online programs, and Moriah Martin, a junior three-time Team USA junior national representative from Alaska who placed third in the women's lightweight black belt division in 2015 in Delaware and second last spring in Colorado.

That will bring the team total to 16, the largest squad Liberty has ever sent to nationals and 10 more competitors than second-year Head Coach Tom Childress had planned to enter.

"We took a look at the budget and determined that since we'll be a legitimate contender for a national championship next year if we continue to grow at the rate we have, we wanted to offer this opportunity to more of our large freshmen class," he said. "We have such a good team this year and so many people worked so hard. It adds a little pressure, knowing they're going to nationals and competing on that larger stage."

Only six of Liberty's 16 student-athletes competing are black belts, with the other 10 vying for a team championship in the color belt division on Saturday.

At least 400 male and 300 female collegiate athletes are expected to compete in forms and/or fighting, with nine of Liberty's 10 color belt competitors doing both.

"There will definitely be a lot more West Coast teams out there this year, though I know Rutgers, coached by Grand Master (John) Park, a Liberty alumnus, will be sending a few and West Point, the defending color belt national champion, will have a complete team," Childress said. "We're taking more color belts than last year and we're going to try to win with just 10 competitors, which will not be easy to do. It will be an uphill battle, but our goal is to finish in the top five for teams."

Winners in the black belt categories, determined on Sunday, will qualify to represent the United States at the World University Summer Games set for Aug. 19-30 in Taipei, China. Healy competed for Team USA in South Korea in 2015.

Junior Sadie Newton, whose recovering from a shoulder injury suffered in Liberty's ACAT home tournament, is a third-degree black belt who will compete in fighting along with junior heavyweight Michael Personius, freshman middleweight Clint Stinchcomb, sophomore middleweight Matthew Gallagher, Martin, and Healy, a heavyweight who recently lost a 7-3 decision to 2016 Olympic heavyweight Stephen Lambdin in the USA team trials.