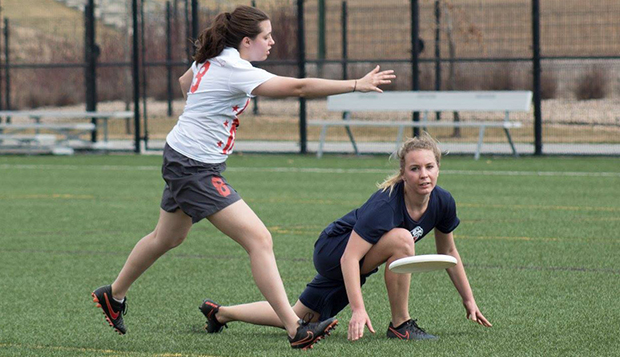 Senior Alexis Taylor passes the disc during a match against Catholic at JMU, where she was one of the Lady Flames' top scorers.

Ranked a program-best 18th in the nation, Liberty University's women's Ultimate team swept through pool play before finishing 5-1 overall and runner-up to Georgetown in a 10-team tournament hosted by James Madison University over the weekend.

The Lady Flames dominated Mary Washington, 13-3, before edging Pennsylvania, 7-6, and trouncing Catholic and Maryland by identical 13-2 scores in Saturday's final round of pool play and the quarterfinals of Sunday's playoffs, respectively.

In the semifinals against host JMU, Liberty trailed 2-0 early before responding quickly to rally for a 14-7 triumph.

"We called a timeout and collected ourselves, got it together and pulled away," Liberty Head Coach Jonathan Mast said. "Defensively, we're a very strong team, but we've struggled a little bit with our offense. In the second half, we took control of the game and our offense was much better. It was a very gratifying win."

In the final against Georgetown, Liberty showed signs of fatigue, giving up three breaks in a row to start the game and never fully recovering.

"We held serve after that, but it was a disappointing finish," Mast said, noting that the Lady Flames had beaten Georgetown previously this season. "We were working particularly on our red-zone offense, scoring when we were deep in our opponents' territory, but we struggled in our downfield offense, moving the disc fluidly from our end zone to midfield. Too many turnovers killed us in the final. Georgetown's very athletic and they took advantage of our mistakes."

He said sophomore Victoria Dissmore, one of Liberty's primary cutters, had a "phenomenal weekend, both on offense and defense," along with senior Alexis Taylor, a first-year player who shared the team scoring lead with graduate Krista Johnson.

"Overall, we played well, but have lots to work on and are hungry for our next tournament," Mast said.

The Lady Flames were coming off a fourth-place finish at a 16-team tournament played March 11-12 in Axton, Va., where they brought only nine players. They dominated North Carolina's B team, 13-2, and scored wins over Massachusetts (9-4), Appalachian State (13-0), and Akron (14-9), losing only to Vermont (13-12) and two tight games against the Triangle Tourists, the second in the third-place final.

Next up, Liberty will travel to Myrtle Beach, S.C., for the first time this weekend to compete in the Eastern Conference tournament, featuring UNC Wilmington, South Carolina, Clemson, and Virginia Conference rival Virginia Tech. The Lady Flames will face the Hokies in Saturday's 9 a.m. opening round before concluding pool play with matches against Georgia at 10:40 a.m., North Carolina State at 2 p.m., and Duke at 3:40 p.m.

Liberty will then have two weeks to prepare for its nine-team Virginia Conference Championships, April 22-23 back in Harrisonburg, Va., where it will be seeded second behind only Virginia and must finish in the top four to advance to Atlantic Coast Regional Championships, May 6-7 in Axton, Va. 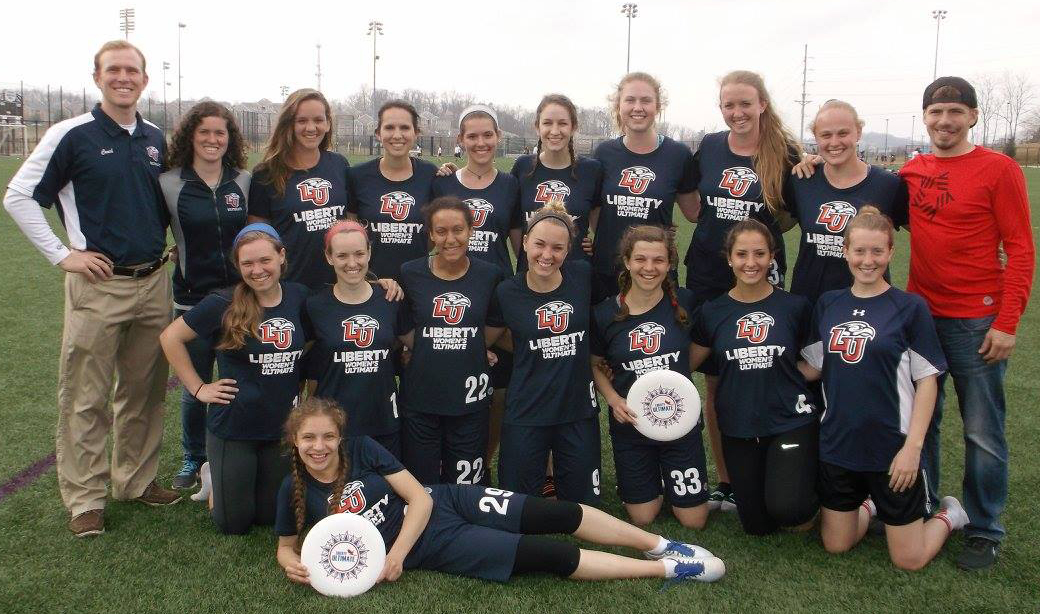