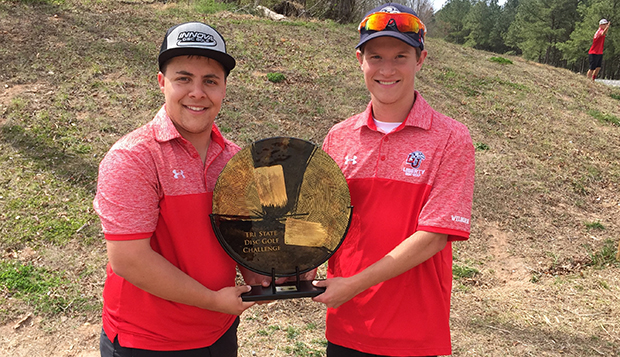 That was the Flames' final tune-up for the National Collegiate Disc Golf (NCDG) Championships, set for April 12-15 in North Augusta, S.C.

Individually, Biscardi and Wilborn both shot rounds of 54 in singles play before combining to card a 52 in doubles to take the trophy.

Both players are members of the Professional Disc Golf Association (PDGA) and will represent the Flames' First Flight team at nationals as well as in the doubles bracket before traveling to the Amateur World Doubles Championships in Mt. Vernon, Texas, in May for their first major tournament.

"We are looking to build on the Nationals experience and learn from it to prepare us for competing for a World Championship, where our main goal is going to be to learn from the pressure and the great players that we will compete against … and to make the cut for finals," Wilborn said.

With at least 40 teams expected to compete in their division, and only the top eight or 10 advancing to the final round, that will be quite a challenge, but one they are eager to attempt.

"Nationals and Worlds will be a great experience and I am excited to see how it will make me a better player over the summer and going into next season," said Biscardi, who will be competing in other tournaments this summer in his home state of Florida. "It's going to be great to bring that experience back home and really work over the summer to be a better player for the 2017-18 season."

Flames sophomore Hunter Thomas, meanwhile, will be traveling to Davenport, Iowa, for his first Amateur Disc Golf World Championships in July, when he will be targeting a top-20 finish.

Thomas qualified for both that event and the United States Amateur Championships by earning enough points in tournaments throughout the past year.

He will anchor the Flames' Championship Flight team at nationals, which Liberty qualified for based on its seventh-place showing last spring.

"My goal is a top-10 (team) finish again this year," Thomas said. "We lost a few of our better players, but our team is still capable of competing at a high level. We have to come in to nationals focused and confident as we can't afford any mistakes this year."

He enters the national tournament with confidence from past experience and expects that to carry over into the amateur championships he will be competing in this summer.

"It is nearly impossible to match the pressure from a big tournament in practice and in local tournaments," Thomas said. "Having experience on a stage like Nationals will definitely help ease the nerves headed into other tournaments."