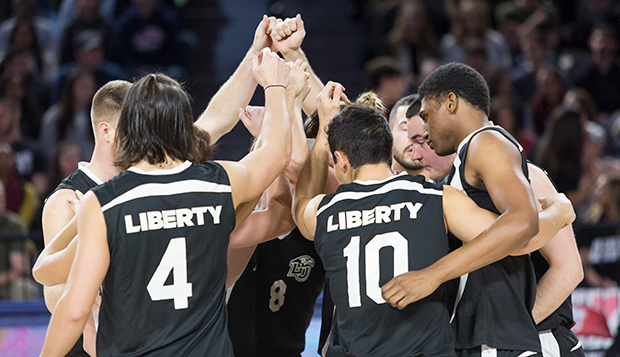 Junior outside hitter Gene DeJesus (right) was the Flames' offensive catalyst in the ECVA South Region Tournament at JMU on Saturday. (Photo by Nathan Spencer)

By winning last month's ECVA Central Atlantic Division Play Date at home, Liberty University's Division I men's volleyball team clinched a bid to next weekend's East Coast Championships at the University of Maryland. But in preparation, the Flames failed to make it out of their pool in Saturday's ECVA South Region Championships at James Madison University.

"It was totally unpredictable," Flames Head Coach Bryan Rigg said. "Part of the problem, I think, is that they realize that even if they lose, they still play next week, and the way the seeding worked out this year for the East Coast tournament, if we (had won Saturday), it would put us in the hardest pool next week. I don't want to talk about winning or strategically losing for positioning (but) they know there's not as much at stake. We should not have lost to Duke, but that game's behind us now."

The Flames were a bit shorthanded, playing without graduate defensive specialist David Hong and sophomore middle hitter Brady Quakenbush. They relied more than normal on junior outside hitter Gene DeJesus, who sat out the first game against Duke, a move that backfired.

"Gene played exceptionally well," Rigg said. "He has been phenomenal when he's been playing. (Junior) Caleb Pitcher stepped up and played well for Brady in the middle, but we missed David (Hong), who's an excellent passer and his jump serve usually gives us an ace or two. That affected our ability to get a good pass to the center."

Host JMU defended its home court and won the tournament to join Liberty and Virginia Tech as the three teams to advance to the East Coast Championships.

"JMU played with absolute urgency, playing at home, and finished ahead of everyone," Rigg said. "Depending on where you're playing and what the circumstances are, everything changes. On any given day, you can finish first or last. It was a combination of becoming complacent and having three of our starters missing. For next week at Maryland, everything will be equal as far as talent goes."

The East Coast Tournament field will feature teams from Massachusetts down to Florida, with Penn State the favorite as the overall top-seed and Delaware, JMU, Liberty, Maryland, Pittsburgh, West Virginia, and Virginia Tech strong contenders.

There's a lot more at stake with teams' placements dictating how they are seeded for the April 13-15 National Collegiate Volleyball Federation (NCVF) Championships in Kansas City, Mo.

"Virginia Tech has a lot of big hitters and took our guys off guard at first," Rigg said. "They weren't used to the balls coming back at them at that rate, but they were able to take some big blows and start giving some counterpunches and started playing with more tenacity and grit."

Ranked 24th, and seeded first out of the South Region, the DII Flames will be one of the top teams to beat at the East Coast Championships. Their attack was fueled by three freshmen at the net.

"Sam Hess did a great job all day in the outside hitter position as did Emmanual Cuffee, who did a great job getting blocks and kills in the middle, and Daniel Koloff at opposite hitter," Rigg said. "Those are (setter) Eli Plasterer's go-to guys. Eli ran the offense well. He's a good leader and he communicated very clearly. He's motivated and helps to motivate others and did a good job at that."