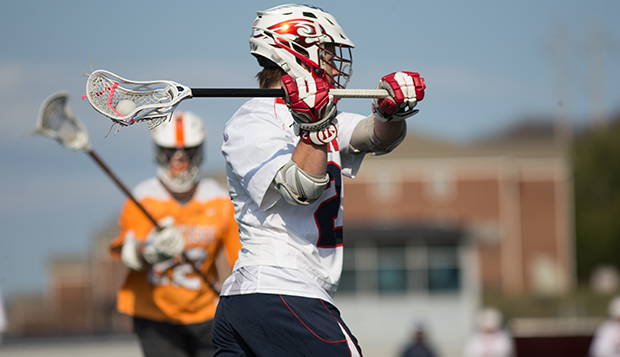 Sophomore attack Sam Gregory looks to pass upfield during a game played at the Liberty Lacrosse Fields, where the Flames will look to extend their 25-game wining streak when they host Florida State on Friday. (Photo by Kevin Manguiob)

Liberty University's 24th-ranked men's lacrosse team rallied from a huge first-quarter deficit to give No. 10-ranked Colorado State all it could handle before coming up on the short end of a 14-13 final, Saturday in Ft. Collins, Colo., narrowly missing its first road win over a ranked MCLA Division I team.

A night after experiencing a late letdown at No. 5 Colorado — allowing the Buffaloes to score nine unanswered goals in a 10-minute stretch spanning the third and fourth quarters — the Flames started Saturday with a similar swoon, outscored by the Rams 8-0 in the first quarter.

"It was a terrible spot we put ourselves in after that first quarter," Liberty Head Coach Kyle McQuillan said. "I was proud of the way we responded, but good teams don't do that to themselves. We can't expect to win by playing three quarters. We've just got to put a complete game together. Last night, it was the fourth quarter, tonight it was the first."

Once again, the Flames — who netted the final five goals Friday night to draw within 20-16 — responded with a strong push, trimming CSU's lead to 9-6 by halftime by outscoring its hosts 6-1 in the second quarter.

Then in the third quarter, after allowing the Rams to extend their lead to 11-7, Liberty trimmed the deficit to 11-9 with back-to-back goals in a span of less than two minutes. However, CSU struck back with two of its own by Derek Delahanty and AJ Stewart to take a 13-9 advantage into the third intermission.

The Flames were still just warming up. They proceeded to score the first four goals of the fourth quarter, knotting the contest at 13-13 and prompting the Rams to call timeout with 4:34 remaining in regulation.

The game stayed tied until the final minute when Liberty was left shorthanded by a penalty with 44 seconds to go and Josh O'Connell scored the game-winner on a man advantage with 17 seconds left.

"That was tough because this was a game we came in expecting to win," McQuillan said. "Even when we tied it up late, we weren't able to capitalize and get the victory, so it stung."

McQuillan had to make two changes in the first half, subbing in freshman goalie Ryan Reynolds in place of sophomore Brayden Harriman and freshman faceoff specialist Jimmy Fowler in place of junior Jacob Campbell.

"Both changes helped us rebound," he said. "Guys were able to come off the bench and find success. Brayden came out a little bit flat and had three goals go against him early, with no saves, so we switched to Ryan, who had nine saves and eight goals against in net the rest of the time. Jacob Campbell came out early winning only two of the first nine faceoffs, so we made a switch there to Jimmy Fowler, who ended up going 6-for-11, so he had a little more success there."

"This team is very young, with freshmen starters all over the place, and they have the stick-to-it-iveness to battle back," McQuillan said. "We played two very good programs this weekend and competed with both of them."

The Flames will fly back to Lynchburg and prepare for next Friday's showdown with seventh-ranked Southeastern Lacrosse Conference (SELC) rival Florida State (10-1), set for 8 p.m. on the Liberty Lacrosse Field, where Liberty will try to keep its 25-match home winning streak alive.

"We're looking forward to Florida State and we don't have much in the way of a turnaround time," McQuillan said. "We don't have many breaks this year, so I don't think our record reflects how good this team is. We're at .500 now and have a tough slate ahead. We're looking forward to these guys proving they are one of the top teams in the country."