No. 5 Buffaloes romp over No. 24 Flames in fourth quarter 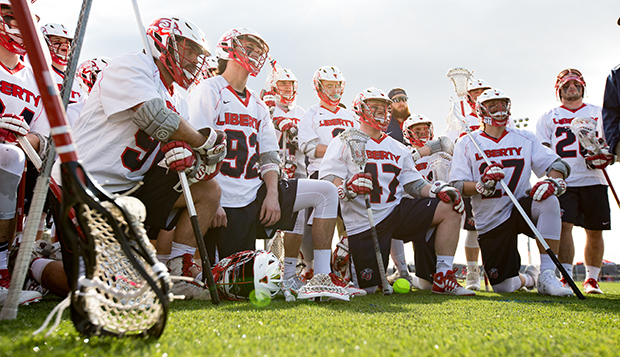 Liberty University's men's lacrosse team engaged in an offensive-oriented battle with Colorado, the 2014 MCLA Division I champions, Friday night in Boulder, Colo., sustaining a 20-16 setback against the fifth-ranked team in the nation.

"Colorado's a perennial national contender and they've been putting up a lot of points on a lot of teams," Flames Head Coach Kyle McQuillan said. "We knew we didn't want to get into a shootout with them. The goal was to keep it close, but Colorado has the ability to go on a 10-goal run at any time and they got the momentum and ran with it."

In a game characterized by physical battles for ground balls in the first half and second-half scoring runs, the 24th-ranked Flames (4-3) led 10-9 late in the third quarter before giving up nine consecutive goals and 11 of the next 12 to the Buffaloes (8-2).

"I told the guys we played great for about three and a half quarters, but we've got to play four," McQuillan said. "We didn't lose to a better team tonight. We beat ourselves with the mistakes we made. There was about a six or seven-minute span where we couldn't get it together. They capitalized on every mistake we made and we made a lot of them early in the fourth quarter. Fortunately, they were things we are in control of and can fix."

Changes in altitude may have affected the Flames in the fourth quarter, playing in the foothills of the Rocky Mountains, a full 5,430 feet above sea level.

Colorado capitalized on a man-up situation to score with four seconds remaining in the third quarter to stretch its lead to 12-10.

"Overall, we played pretty well man-down, but that goal sparked their momentum which turned into that fourth-quarter run," McQuillan said.

After a timeout late in the fourth, Liberty did finish the contest with a five-goal flurry to give it some momentum going into Saturday night's contest at 10th-ranked Colorado State (6-4).

"I was proud of the effort, especially late when we kept fighting and putting the ball in the back of the net," McQuillan said. "It was important to finish and to finish strong, one goal at a time. Unfortunately, we ran out of time to complete the comeback, but the guys displayed a no-quit attitude tonight."

"Caleb, as a freshman, has continued to push and be a big leader on the field," McQuillan said. "I've been impressed with his play, and he's gotten better in each game. A game like this really helps him establish himself."

Sophomore goalie Brayden Harriman kept Liberty in contention through three quarters before the Buffaloes riddled him with shots in the fourth.

"Brayden played phenomenally in the first half, making some great saves," McQuillan said. "Unfortunately, he let a few in and started to lose some confidence and struggled in the net late."

While junior midfielder Jacob Campbell won his share of faceoffs in the first half, Colorado was able to maintain a time of possession advantage by winning the faceoff and ground ball battles in the second half.

"The guys proved to themselves and the coaching staff that they can compete at this level," McQuillan said. "The guys have to build some confidence from this, but at the same time understand they left something on the table. We lost tonight, but it was definitely a game we could have won. We made too many mistakes. We've got to be able to bounce back, take what we learned here and apply it (Saturday night)."

That game against the Rams, who have won six national championships, most recently in 2012 and 2013, is set for 8 p.m. (EST) in Fort Collins, Colo. It will be streamed live on YouTube.