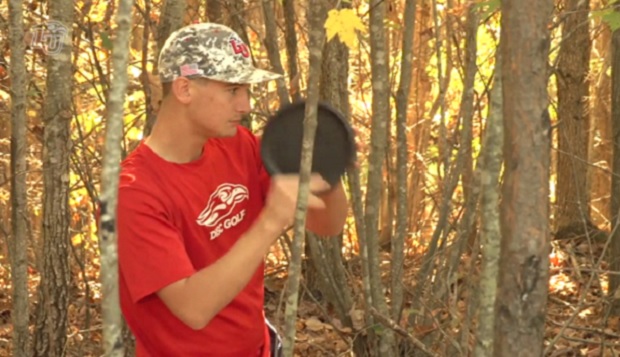 Hunter Thomas competes in the Flamethower Invitational on Liberty's East Campus course this past fall.

Hunter Thomas, a sophomore on Liberty University's disc golf team, talks about his rapid progression in the sport and how he uses it as a platform to share his faith on this Player Profile produced by Club Sports Video Coordinator Patrick Strawn.

Thomas, who's from Lynchburg, Va., grew up playing basketball for Timberlake Christian High School in nearby Forest, Va., before his brother introduced him to disc golf the summer after he graduated.

"I've played almost every day since," said Thomas, who has qualified to compete in the Amateur World Championships and the United States Amateur Championships in Iowa in July. "When I first started playing, I fell in love with Liberty's East Campus course. It turned out my dad knew the Head Coach (Steve Bowman) and got him to take me out to (the team's second 20-hole course near Hydaway Outdoor Recreation Center) and while we were playing with him, he told me about the team and tryouts."

Last summer, Thomas and 2016 Flames graduate and current professional player Lance Brown traveled to Zambia with Eagles Wings to help build the first disc golf course and introduce youth in that south African country to the sport and the Gospel through clinics.

He and his current teammates focus on sharing their testimony with opposing players during collegiate tournaments, including this Saturday's Tri-State Challenge in Wilkesboro, N.C., and the April 12-15 National Disc Golf Collegiate Championships in North Augusta, S.C., where the Flames are coming off a best-ever seventh-place Championship Flight finish last spring.

"Disc golf is a very unique opportunity, ministry-wise," Thomas said. "It allows you to have about an hour and half to sometimes two or three hours with the group of guys on your card at these different tournaments and it's just a great opportunity, not only to share the Gospel, but also to build relationships with these guys and show them what makes us different as Christians and let us show Christ's love through the way we react to different things in the sport and how we interact with each other and with them."