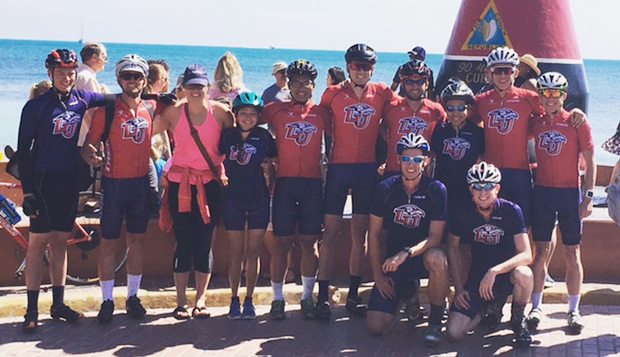 Liberty cyclists and triathletes pose at the southernmost point in the United States, a monument on Key West, Fla.

A spring break road trip to Florida offered 13 members of Liberty University's men's and women's cycling and triathlon teams a chance to test their limits on the open road — en route to the Florida Keys — and open water off the shores of Miami, in a training camp directed by Head Coach Parker Spencer.

"It was a lot of fun and we got some great training in," Spencer said. "It was definitely more cycling-heavy, but we still got a lot of running in and open-water swimming in the ocean."

The team ran along trails at their campground and along the South Beach boardwalk before spending a day cycling in Everglades National Park and embarking on a two-day, 175-mile ride from Miami to Key West.

"The first day's ride was right at 100 miles and rode through a crocodile refuge where we saw some really big iguanas, so the wildlife was really cool," Spencer said. "It was just beautiful scenery, great weather, and the average speed was nice and fast. For several of the team members, it was the furthest they'd ever ridden in one day."

After camping out on Siesta Key, the group cycled 75 miles to Key West — the southernmost point in the United States, 90 miles north of Cuba — the next day, changing 11 flat tires along the way.

On the way back to Lynchburg, team members put their training to the test in Brevard, N.C., near Asheville to compete in the Brevard College/Warren Wilson College Criteriums, sanctioned by USA Cycling.

"We already had over 300 miles of cycling on our legs that week, and from riding in the Lynchburg area, we're used to the hills," Spencer said.

This weekend, Spencer will travel with the triathlon team to race in the Smithfield Triathlon, its last event before the April 21-22 USA Collegiate National Championships in Tuscaloosa, Ala., where 20 team members will compete. Meanwhile, cycling Assistant Coach Van Phillips will take the men's and women's riders to Annapolis, Md., for Saturday's and Sunday's Polling House Road Races hosted by the Naval Academy.

So far, sophomore Gabe Morgan and junior Jake King, who spent the fall semester training in France while studying through Liberty's online programs, are the only two cyclists who have qualified for the April 27-30 USA Cycling Collegiate National Championships in Grand Junction, Colo.