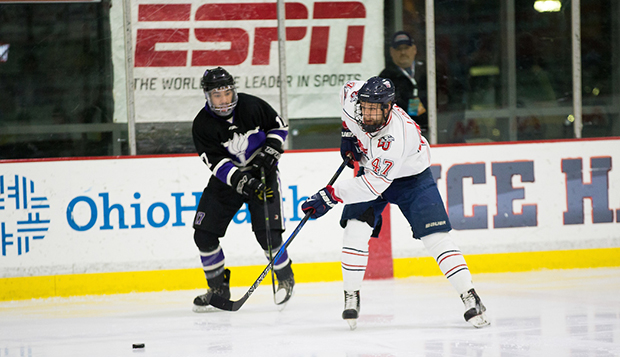 Making its second consecutive appearance in the ACHA Division II National Championship final, Liberty University's ACHA Division II men's hockey team came tantalizingly close to capturing its first national title, Sunday night at the Ice Haus in Columbus, Ohio. The Flames took New York University down to the wire and left everything on the ice before coming up on the short end of a back-and-forth 4-3 contest that featured three lead changes.

The Violets (28-4-1), who won their second championship in three years, seized a 1-0 lead midway through the first period when Keaton Baum slipped the puck under Liberty sophomore goalie Jarrett Epp off assists from Scott Mulligan and Matt Banks with 12:21 to go.

Moments later, the Flames (30-2-1) responded with the tying goal on a shot from the top of the right circle by senior defenseman Daniel Huntington into the upper netting.

Liberty junior forward Robert Ward nearly netted the go-ahead goal in the closing two minutes of play when he skated from left to right through the crease and tried to tuck the puck in around New York freshman goalie Adam Salisbury, but it sprung loose as he was tripped to the ice.

The Violets reclaimed the lead with 13:28 left in the second period on three successive shots on net, capped by Mulligan's bar down rebound of a shot by Jack Orne that Epp knocked down with his glove after blocking an initial Reese Buckholtz shot.

The Flames missed a golden opportunity to tie it up on a four-on-two break when Salisbury gloved senior forward Ben Freymond's wrist shot from deep in the slot seemingly right off his stick.

Ward was then hooked from behind as he tried to lift a backhand past Salisbury after getting beyond the Violets' defense. That put Liberty on a power play that led to their second equalizer with 6:47 left in the period when graduate forward Tyson Street deflected in a shot from the left circle by freshman defenseman Jackson Roy.

Freymond produced the Flames' only go-ahead goal in spectacular fashion with 4:14 left in the second period, after taking an outlet pass along the right boards. He skated in one-on-one with Salisbury and showcased phenomenal stick skills, deking the puck to the left before tucking it around the goalie frozen in a split formation into the open right side of the net.

However, for the second game in a row, the Flames gave up a goal in the closing 30 seconds of a period when Baum's shot through a screen beat Epp inside the left post, tying the game at 3-3.

That set the stage for a dramatic third period, culminating in Mulligan's second goal of the game, which proved to be the game-winner with 7:13 remaining in regulation.

The Flames picked up the pressure for the final minutes of play, with Salisbury making another incredible glove save of a shot by Freymond before Epp came through with three clutch saves around the 2:00 mark, one on a two-on-one break by the Violets.

Head Coach Chris Lowes pulled Epp to give Liberty a man advantage for the final minute and a half but New York cleared the puck three times for icing calls, wasting valuable time for the Flames.

"We had good energy in the second period and we've really owned the third period the last four games," Lowes said during the second intermission. "In our locker room, our guys believe it's our time but New York does, too, after it knocked out Florida Gulf Coast University," the No. 1 seed out of the Southeast Region, in the final round of pool play. "It's hockey, and it can be cruel. It's going to come down to one big play, one bounce."

The Flames won their only previous meeting with New York, 9-1, in the final round of pool play at the 2015 National Championships in Salt Lake City. The Violets had already clinched a Final Four berth and rested their starters before going on to capture their first national title by upsetting FGCU in the final.

New York will transition from ACHA DII to DI next season and, along with Syracuse, will join Liberty's Division I team in the Eastern States Collegiate Hockey League (ESCHL), making it an eight-team conference. 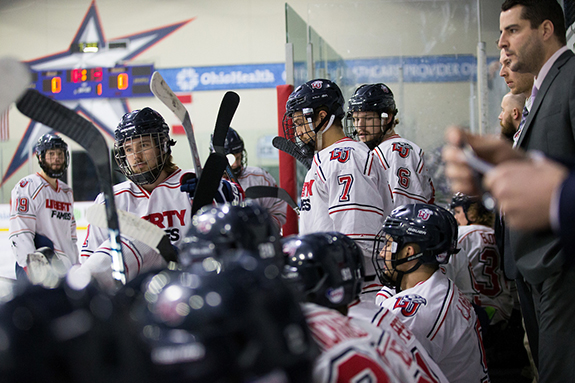